Going Round in ‘Circles’. Google+ – An overview of benefits.

Home    Insights    Going Round in ‘Circles’. Google+ – An overview of benefits.

As Google storms ahead with its new feature Google+, will it really ever compare to more established social networks such as Facebook and Twitter?

In response to our last, more cynical post on the efforts of Google+, I have assessed the unique features offered by Google’s latest feat and tried to provide a flip side opinion on NEWgle – A breakdown of recent key updates from Google.

According to Brian Solis, one of the most prominent thought-leaders in new media, Google+ (Plus) is essentially a culmination of features from the likes of FriendFeed, Google Buzz, Facebook and Google.com. It is one of the top three competing for online attention alongside Facebook and Twitter. 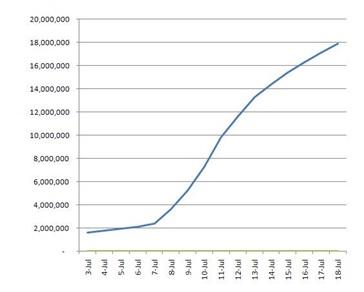 If Google + continues to grow as it has started (taking evidence from the table (above) and graph, it stands a good chance of survival in this social media circus.

Facebook will always have the added benefit of being ‘the first’ successful social media site. It is well established and familiar to 750 million users worldwide. Google + stands to benefit from following the likes of Facebook and Twitter as now the 2 billion strong network of internet users understand the concept of social media and social media sites; thus making it easier for Google+ to slide smoothly into its new found place in social media.

This excellent infographic from the Wall Street Journal / comScore gives an indication of how take up has differed by country:

Why is Google + Clever?

When Facebook was launched in 2004, it was accessible only to members of Harvard. Through demand it rapidly expanded to become a worldwide phenomenon. Google+ has managed to reach 18 million subscribers in a very short period of time; though it only allowed a select few to access Google+ trial, these people were subsequently able to invite a small number of their connections to join too. This technique created an urgency and buzz around it making others ‘need’ to join the newest craze.

Although everything is looking up for Google + right now, it needs to be careful that it does not expire by trying to make itself too exclusive. I predict that in the near future the number of new subscribers to Google + will plateau and daily activity from those users maybe even drop slightly.

‘Like The Circles That You Find in the Windmills of Your Mind’.

From a social point of view, the ‘Circles’ feature in Google+ is what sets it aside and ahead of all other social networks. Our last post on Google+ did make a good point noting that “it seems like Google is trying far too hard to knock (Facebook) off its perch. I can’t imagine that 750,000,000 (yes that many) users will want to re-upload hundreds of pictures for no reason.”

However, I feel that aside from re-uploading all your photos, which can always remain a Facebook priority as far as I am concerned, ‘Circles’ has one specific benefit that is not to be sniffed at.

When you add or invite friends in ‘Circles’, you have the option to add them to a specific ‘Circle’ (group). The group options (as default) are:-

How Does It Work?

So, why is the Google + ‘Circles’ feature so good?

When adding friends into your ‘Friends’ circle for example,

A) They do not know which circle they are in, keeping your profile that bit more private.

B) Their profile and subsequently anything they share will only be visible in your ‘Friends’ network. Nobody in ‘Family’ or ‘Acquaintances’ etc. will be able to see the activity.

‘What is the point of that?’ I hear you say.

This feature comes in to its own when you experience a need to separate your work, family, friends and love-life. Don’t we all sometimes think that this could be the underdeveloped area of our digital lives? We all need to separate certain social circles from one another sometimes. I certainly have locked down my Facebook account since it became involved in my work life – who wouldn’t? It makes sense as a professional – why would my boss want to see what my sister is talking to me about? It encourages mess, and with the legal aspect of the web much more under scrutiny now -we all have to take responsibility for our online social activity.

Although Facebook and Twitter allow grouping which enables the user to create lists, it is not a major part of how the application works.

We are all aware that in today’s internet world many children have social network profiles. With ‘Circles’ you could protect your 10 year old son or daughter from seeing certain parts of your social life. For example, your work’s Christmas party or your discussion with other parents at their school about how to deal with naughty behaviour. 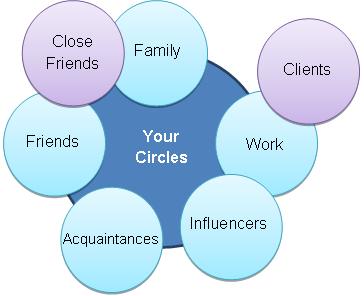 Your group in ‘Work’ might include ‘Influencers’ and ‘Clients’ however they would see differing streams from you as they don’t share the same circle – they only overlap your work activity stream. I.e. they both see anything in your work stream but don’t see each other’s stream activity.

The Diagram explains clearly how your ‘Circles’ work. Only others within the same group will be able to see the activity, of that group protecting you from potentially upsetting people or giving away information you had hoped to keep private. You can have people in multiple ‘circles’ and this is where Google+ tries to make your life easier.

Because you can tailor your ‘Circles’ to within an inch of their creation, you are also tailoring your streams. This means you only get the most relevant conversations in each group. My PPC (Pay Per Click) ‘Circle’ is completely relevant to PPC. My Friends ‘Circle’ is only relevant to my social life and things I like to keep separate from work.

By having the option to separate out my ‘Circles’, I can keep my finger on the pulse of all topics relevant to me.

‘Circles’ places you in the driver’s seat, it is intuitive. Never before have you had so much control over your social network.

What Does It Mean For SEO?

You may have noticed recently on many websites and blogs the Google+ button. Whenever you ‘+1’ something that you like, whilst being logged into your Google account, Google curates these results based on the same action by friends in your network. In a similar way to Page Rank, you as an individual will be similarly ranked. This, according to Brian Solis ‘represents a natural fusion of SEO and SMO.’

This is where Facebook must directly compete with Google’s +1 to enhance the visibility of its own content in ways that will not breach its privacy laws.

As with any new internet site, it takes time to adjust to the slightly differing techniques and layouts but sooner or later, although it may never match let alone beat Facebook to the top spot, I believe it should do well. In my opinion, there is still a lot of development in the pipeline. It feels more like a chat room at the moment than ‘the new Facebook’.