How the World Searched for the Royal Baby

Home    Insights    How the World Searched for the Royal Baby

Whether you’re a bunting-wielding Royalist or Guardian-reading republican you will have been unable to avoid July’s birth of Prince George Alexander Louis (or to refer to him by his proper title, The Royal Baby).

The worlds media convened on the St Marys hospital in London and from the moment Kate Middleton went into labour on Monday 22nd, to when Prince William drove the royal Range Rover to Kensington Palace the next day, there was no escaping the third in line to the throne.

Despite the fact the media coverage of the birth received more media coverage than most major events it seemed our thirst for Royal Baby news was not sated, with people flocking to Google to satisfy their princely itch.

On the day of the birth there were over two million searches for Kate Middleton and more than one million for Royal Baby on Google in the UK alone. Royal baby watch and Royal family tree were also in the top 15 most searched terms of the day. The next day Kensington Palace and Carole Middleton were in the top ten most popular searches in the UK. 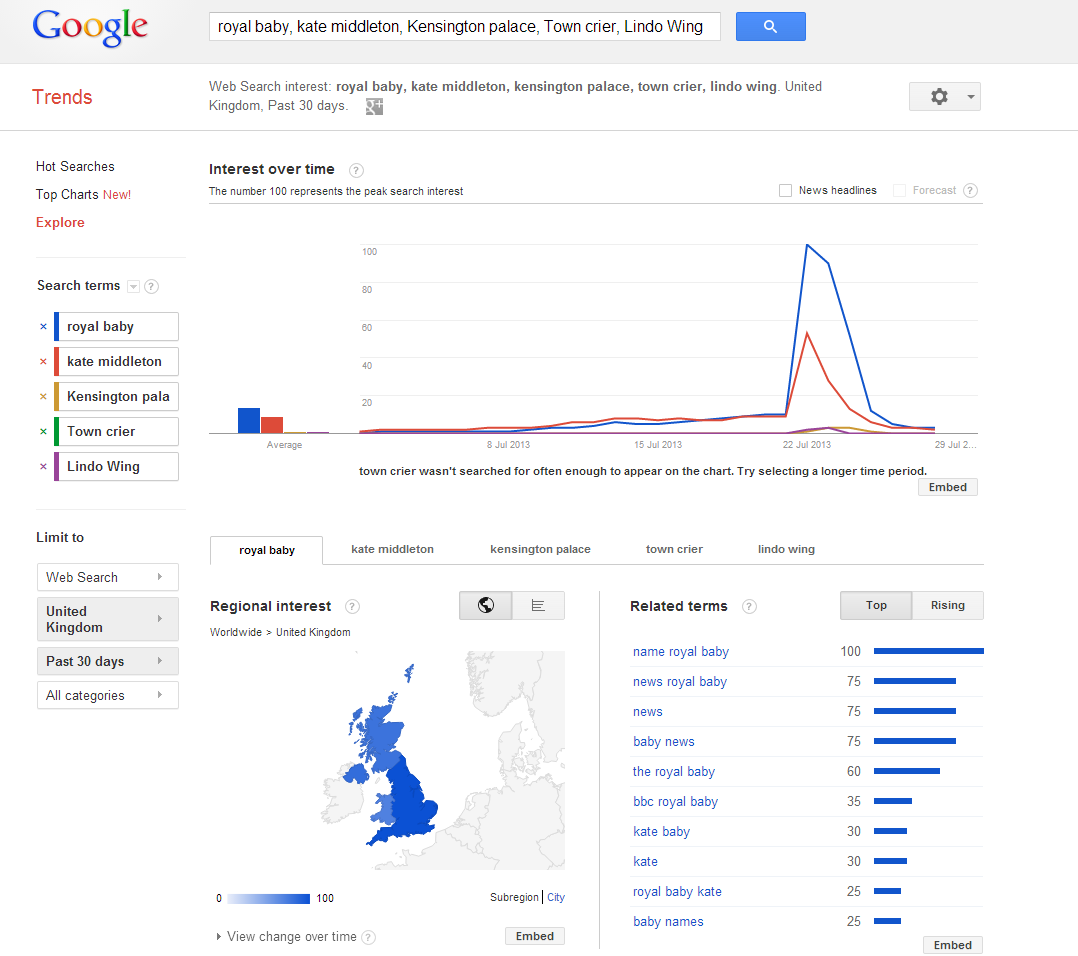 This peak in interest is more clear in the image above, which gives an example of the extent of the British public’s Royal Baby fervour with even Lindo Wing (the name of the maternity ward) seeing a surge in searches.

It wasn’t just the UK that was frantically searching away on Google for all things Royal Baby related. The Americans, notorious for their love of Princess Diana, were unsurprisingly enthralled by Wills and Kates good news. So much so that even the gate-crashing, imposturous town crier whose “OYEZ-ing” gave the on-looking media an old fashioned announcement to fawn over, was the subject of considerable interest in the US, as the map below shows. Kate Middleton was also the most popular search in the US on Monday 22nd. 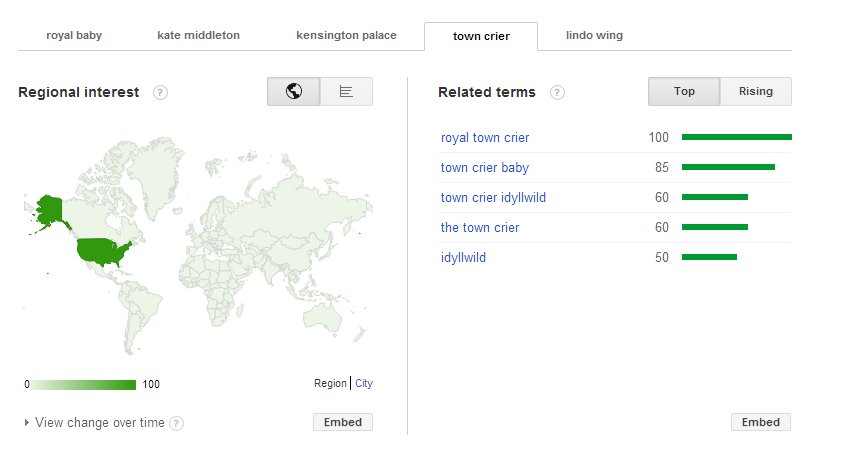 It wasn’t just the royal PR machine that benefitted from the arrival of Prince George. Experian Hitwise data shows that there were 94 million visits in the UK to news and media websites on the day of the birth, the highest number in 2013 and a rise of 22% from the previous Monday.

This surge in interest in the news compares to 57 million visits on the Diamond Jubilee and 85 million following the Boston bombings. Sky News – no doubt due to Kay Burleys ubiquity – was the biggest winner of traffic, with visits up 93%, while the BBC was next at 40%. This increase in interest of these news sites also translates to Google searches (below). 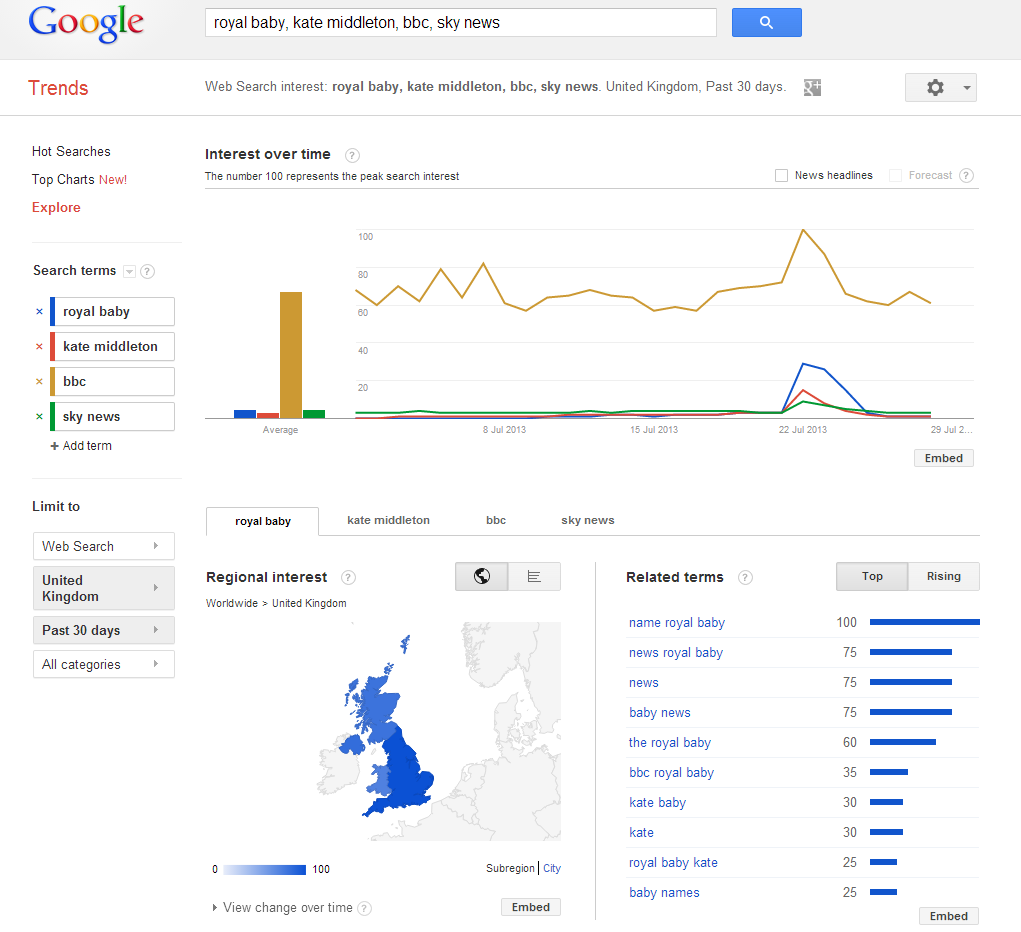 As well as the interest in the UK and US, Canada, Australia, New Zealand and Italy were all using Google to find out about the Royal Baby. 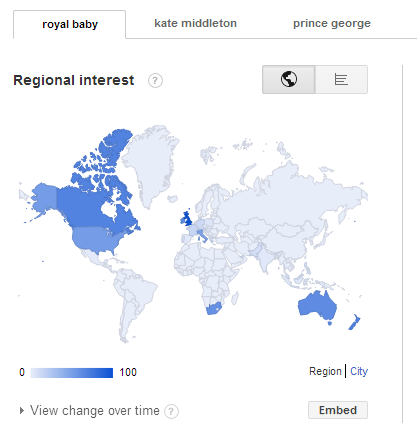 Although we are meant to be in the age of social media, the correlation between the royal birth and the increase in Google searches shows that people – and lots of them – still turn to search engines to find out about what is going on in the world. 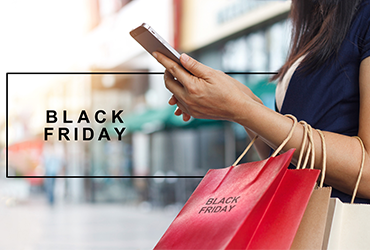