Is Facebook shutting the door in the face of small businesses?

Home    Insights    Is Facebook shutting the door in the face of small businesses?

Reaching a mass audience is a great way to promote and advertise a product or service. Larger companies often use a number of promotional tools in order to interact with their target audience and market, including TV, print advertisements, radio and social media. This is due to their huge budgets which they have available to spend within these areas – not a luxury shared by all companies! 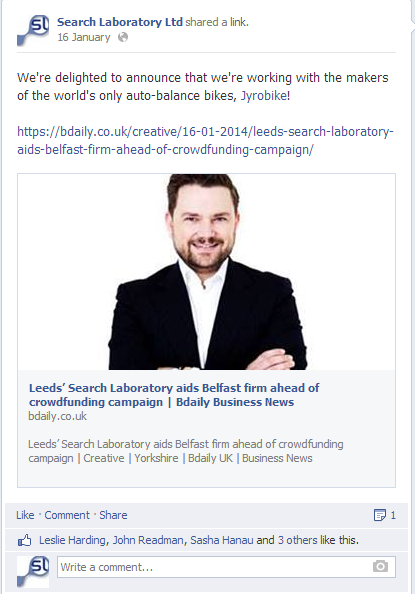 Social media has been a significant tool in brand awareness and marketing of a product or service.

Focusing on Facebook, with 1,110,000,000 active monthly users, businesses were able to actively communicate and interact with a mass of users who had liked or followed their business page.

In comparison to other advertising tools, Facebook gave businesses the power to connect with an audience for free (for example, right).

This made the site extremely appealing for companies, as it allowed them to forge somewhat of a relationship with their fans.

However, within the last year, Facebook has made changes to its news feed procedure, in order to allow more meaningful and less spammy articles to be displayed to its users.

It claims that users want to see, more than ever, relevant, meaningful articles, in comparison to spam-related advertising campaigns from businesses which they have liked or followed on Facebook.

Due to these changes, businesses have noticed that they are finding it difficult to reach their audience through unpaid, organic promotion.

This has led to those believing that Facebook is pushing for these businesses, whether they be small or large, to pay for their posts and adverts to be visible.

Facebook has recently come forward and admitted that this is in fact their intentions for the future.

It mentions that it “expects organic distribution of posts to gradually decline over time” and later go on to recommend that “in order to maximize delivery of your messages and posts within a users News Feed, your brand should consider using paid distribution.”

Ironically, Facebook still has the following message displayed on their homepage: “Its free and always will be.”

This change will reduce the amount of small to medium size businesses that use Facebook as a marketing and promotional tool. Those just starting up will not have spare cash available to spend on advertising at this stage, making it extremely hard to gain attention and may hinder their future chances of success.

Businesses have invested high levels of time and energy into building up a devoted fan base as well as attempting to enforce their position within their desired market. Though with this change, it will mean that these fans are in fact not seeing almost any of their promotional posts, unless they in fact pay for these to be published.

Much to the dissatisfaction of users who actively promote across the social media platform, the reality of this issue is that Facebook is still a great way to reach a mass number of users, therefore, who wouldn’t start charging for a service which still has a great amount of demand. If they can get away with it, why not?

Ultimately, Facebook, like other businesses, has stakeholders to please. What make’s shareholders happy? Increased revenue, and this is what this change should bring.