Every year since 2007, people from the Nordic countries are surveyed on their ecommerce habits. This years report shows that online shopping is part of daily life in the Nordic regions and that portable devices have had a big break through. It also shows:

Another report shows that Scandinavian capitals are the worlds most expensive when it comes to shopping, so the fact that Nordic people shop on foreign websites might not come as a surprise.

Looking closer at Sweden alone, the following is a summary of the most interesting facts and figures showcasing the who, where, why and how Swedes shopped online during 2013.

Most popular industry to shop in

The Swedish ecommerce market was valued at 75.5 billion SEK during 2013 and the following image illustrates the distribution to the different industries. 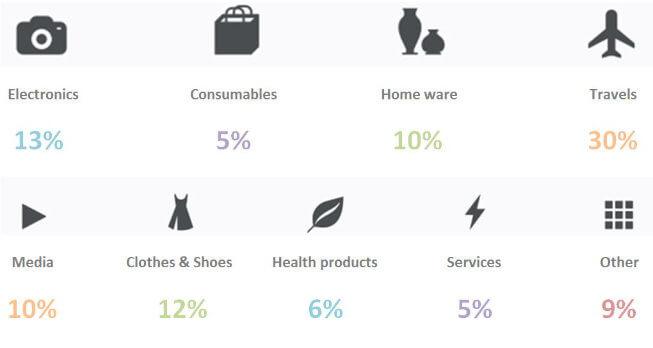 All different age groups shop online and they have all had an upturn over the last three years. Mostly it is people living in the capital (Stockholm) that shop via the web, but during 2013 the biggest change lies with those living in the countryside. There the increase of online purchases rose 29%.

The reason why Swedes shop online is because it simplifies the process – you can easily compare prices and its cheaper than buying in stores. Swedes seem to be all about simplicity as it’s also the answer to the question how they want to handle payments. Together with secure payment these are the most important factors, and to over exaggerate a little bit – the only factors Swedes consider.

Out of the payment options three stand out; card, invoice and internet banking. Card payment is the most popular and what men prefer to use. Second is invoices, which more women prefer. Also, card payment is more popular in Stockholm than anywhere else in the country and it is also the place where invoice is the least popular way of payment.

During 2013, 38% of all Swedish online consumers did at some point terminate their purchase. There are different reasons as to why they decided not go ahead with the purchase, such as complicated registration, technical problems and not enough information, but the most common factors are the payment procedure and lack of payment options.

Use of mobile device

The reason Nordic people use a mobile device for online shopping is because its convenient and you can do it at the same time as commuting on the bus and train for example.

Sweden vs other Nordic countries

The payment availabilities are more evenly spread in Sweden whereas in Norway and Denmark card is the most popular method by far. For Denmark this is because DANKORT holds a very strong position and it is available for all ages. In Finland it looks a little bit different. Here internet banking is the preferred payment method.

Earlier I mentioned that a lot of Nordics use foreign websites to shop from and this is something Norwegians are quite the experts in, half of their online shoppers do it. It’s not as popular in Sweden, where 39% claim to have done so, but commonly for all four countries is that the amount of people doing it has increased over the years.

The mobile device usage for ecommerce has shot sky high in all countries since last year but Sweden tops the league table for breakthrough, total purchases and amount of people using a smartphone or tablet. Common for all the Nordic countries, people who use a portable device for ecommerce have on average made around nine purchases during 2013.