Incorporating popular culture into a brand’s PR strategy can have great benefits. With built-in social currency in the form of ever-popular characters such as Harry Potter and James Bond, you don’t have to spend big to tap into their respective audiences.

With a rich world and an active fan base, Game of Thrones offers more than enough material for brands to utilize in their marketing. Here are four examples that worked with very different budgets:

Just because you don’t have to go back, doesn’t mean you can’t! Using one of the more fantastical elements of the show, dragons, Blinkbox crafted a huge dragon skull and planted it on Dorset’s Jurassic Coast which is a popular site for those hunting for fossils. Just the sheer size of the skull, which was as big as a bus, was enough to capture the public’s attention and generate over 200 pieces of coverage.

To top it off, Blinkbox posted the above video on its blog to show behind the scenes of the sculpture’s construction, along with some real-time reactions from the public, which gained over 800,000 views on Youtube. 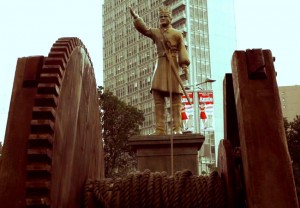 To celebrate returning for its fourth season, the broadcasters of the show in New Zealand, SoHo, constructed a statue to one of Game of Thrones’ most reviled characters, King Joffrey. Placing it in the country’s largest public square, a rope was attached to Joffrey’s waist which was pulled

inch by inch every time #BringDowntheKing was used.

By uniting the fan base against a long-hated character, fans could vent their frustrations to the tune of 875,000 tweets to send the young king tumbling. All of this, of course, generated brand awareness for SoHo. 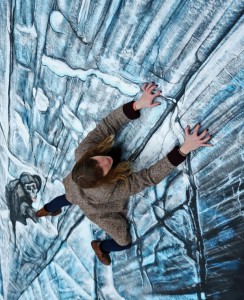 Promoting the release of the third series on DVD, HBO UK commissioned 3D street artists 3D Joe & Max to recreate The Wall, a towering wall of ice scaled by another show favorite, Jon Snow. It’s an entirely image-led campaign, with the public able to snap a popular location from the show and even be a part of it. Standing on a ledge at the top of The Wall (as pictured), passers-by tweeted #ScaleTheWall in one of the more interactive examples of public artwork.

Rather than taking to the streets, Viking looked inwards to the culture of Game of Thrones viewership, which is rife with marathons, speculation and, most importantly, spoilers. With the show attracting brand new viewers every year, intent on keeping the show’s plot twists secret until they can catch up, spoiler tags were created so that those who watch the show could clearly identify how far through the series they were, and instantly know what conversation topics were off limits.

It’s an amusing and literal take on the spoiler tagging that has become standard procedure on social media and forums such as reddit, integrating social and physical media together.

Each brand jumped on the back of a popular piece of culture, by tailoring a new product or experience around it. From gargantuan dragon heads sitting on beaches to printable labels, brands of different sizes with varying budgets found ways to tap into the feelings of the show’s audience and give them something they wanted.

Tying popular culture into your brand’s marketing campaign needn’t be a stretch, so long as you pick a film or television series with enough scope. Consider:

Making a fantasy world come to life is one of the best ways a brand can engage with an audience hungry for new content, and you can do this no matter what your budget may be. 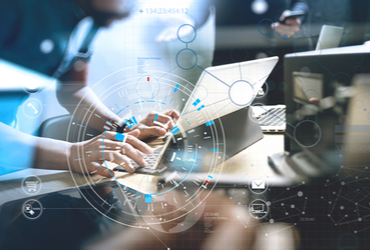