It was Christmas time in Germany. People were looking forward to their break. Suddenly, Robbie Williams appeared in a TV ad for Volkswagen, as the company’s new marketing manager. Has the world gone topsy turvy? No, this was just the latest PR campaign from the Wolfsburg car manufacturer. Let’s recap what happened:

Robbie Williams publishes a video, telling his fans that he is tired of the showbiz world and that he is looking for a job in Germany. He dismisses football and fashion as career options, but hints that Germany has amazing cars and that he would welcome a call.

This saw replies from car manufacturers, football clubs, magazines and radio stations. An association for the prevention of cruelty against rabbits even tried to employ the ‘Angels’ singer. 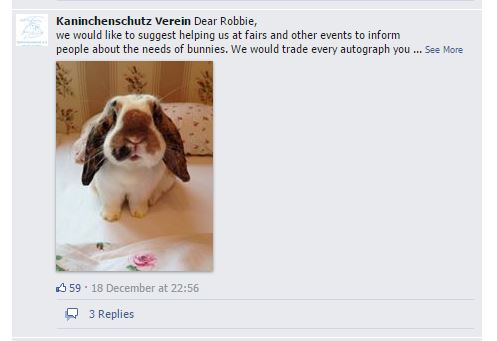 Volkswagen runs a TV ad at prime time announcing that Robbie Williams will be their new marketing manager or Marketing Leiter.

The landing page for the new selection of cars klingt-gut.de has already received 80 links, over 1000 Facebook likes and 44 retweets. The video has received 27,000 Facebook shares, over 1,300 comments and has been viewed over 400,000 times.

Furthermore, the PR campaign managed to get news coverage on a variety of websites from newspapers to car magazines as well as lifestyle magazines further increasing exposure.

What made it so successful?

Robbie Williams is very popular in Germany: Volkswagen managed to get not just any celebrity on board but somebody who they knew would appeal to a mass audience in Germany.

Cross-platform campaigning: Starting with an inconspicuous video message by Robbie Williams, the marketing campaign was later taken to a more traditional channel, the television commercial. This way the campaign targeted a broader audience than social media alone. This was particularly smart as Germans are very cautious when it comes to social media, as can be seen in this infographic.

Blurring marketing and PR: Since most people believed that Robbie Williams video was genuine, it created over 2,300 responses and more than 940,000 views. This media buzz made people anxious to find out what is going to happen next. So Volkswagen could be certain that when they rolled out the advertisement, people would engage with it. As we can see from the amount of coverage on various sites as well as the responses on social media, they were right.

What to take away from it

Although it is important to be able to react quickly to relevant news stories (see our previous article about Sixt newsjacking the train drivers strike in Germany), this example shows that a well-planned campaign can create fantastic exposure as well. Volkswagen showed that they know their target audience in Germany well and that they tailor-made this campaign for them. Finally, we can see that despite German’s cautious engagement with social media, a cross-platform campaign can be a successful way to promote your company or product in Germany.