Home    Insights    App store optimization: how to get your app ranking

An app is similar to a website – no matter how good it is, if nobody can see it, it is worthless. Of course, there are plenty of ways to get people to download your app, so we take you through tips on how to get it ranking.

Much like Google, iTunes and Google Play keep their ranking algorithms a secret. In days gone by, it used to be based purely on number of downloads. However, this led to a cycle of only big, well-known apps ranking. Whilst the number of downloads is still a factor (there are a number of services out there guaranteeing rankings by downloading and deleting an app tens of thousands of times – something Apple is getting wise to), it is not the be all and end all.

App developers believe that the main factors which currently rank an app are:

The importance of app reviews

If you’re anything like me, you will have a whole bunch of apps that are still on your phone that you haven’t used in months – let’s call these ‘New Year Fitness Apps’. While downloads play a part, you need people to actually use your app. What is it that your app provides? It must be a useful or entertaining app with ease of usability if you are to ensure it is used.

Making a good app is doubly important, as ratings are also an important ranking factor – both star rating and number of reviews. This is why apps are so desperate to get you to leave them feedback. This is one of the reasons that the infuriatingly difficult yet simple app sensation, Flappy Bird, grew so quickly. 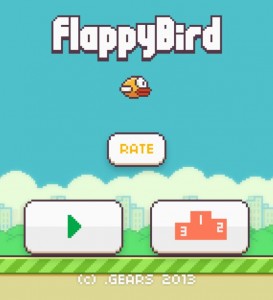 The app with no budget behind it ended up making $50,000 in revenue a day and grew so big the developer withdrew the app as he couldn’t deal with the fame it brought him. In early versions of Flappy Bird, the ‘rate’ button was in the same location as the ‘play again’ button, meaning that millions of people clicked through to rate the game whilst trying to play again. The app was receiving 400 reviews a day in the early days of its development. This is before the app blew up and went viral, when reviews at one stage grew to 800 every hour.

To put this into perspective, Candy Crush Saga – which is another app success story has – at the time of writing, 133,033 reviews since January 2013. The equivalent, again at time of writing, of 157 reviews per day. While nobody apart from Flappy Bird developer Dong Nguyen will know if the position of his rate button was by accident or design, we know that it had a huge impact on its popularity.

In conclusion, mobile is here to stay and as the app market gets more competitive then the importance of app store optimization will only grow. As we have seen with Flappy Bird, done well it can literally turn into a cash cow in the space of a few days – and there are not many industries which can say that. Whether your app is your whole business or merely to support your business then your optimization strategy should not be left to chance.

What do you think the hot new app for 2015 will be? Tweet us @searchlabs and let us know.