Google began testing ads from app developers in the Google Play store search results back in February, but this was a limited test and wasn’t available to everyone. However on Wednesday (29th July) the company announced that “Search Ads on Google Play will begin to roll out today to all advertisers and developers who use Search app install campaigns on AdWords.” 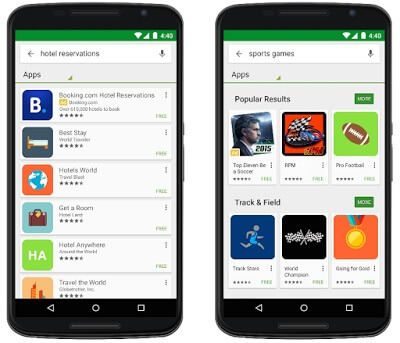 Google Play now reaches more than one billion people on Android devices and is available in more than 190 countries. With this extensive reach available Google has assured that “search is one of the biggest drivers of app installs in the Play Store”, opening up a lot of potential for app developers and advertisers who want to give their app a paid boost.

Google will also be launching its Universal App Campaigns feature in “a few weeks”, which will allow an advertiser to promote apps synergistically across all Google properties, including:

Surojit Chatterjee, Director & Project Manager of Mobile Search Ads, believes that this will make it easier for advertisers to use the system and measure the success of campaigns across multiple platforms: “Simply let us know what your ad will say, who you want to reach, your budget and target cost-per-install, and we’ll do the rest.”

Following the launch of Google Play Search Ads, Google has added “First App Opens” as a new metric to measure campaigns. The metric measures when a user opens an app for the first time after clicking on an ad and completing an Android app install. This measurement is available across Search, Display and YouTube, making it an addition to ad campaigns through other platforms and not just the newly added Google Play.