Is your business ready for the east?

Home    Insights    Is your business ready for the east?

Having recently set up a new PPC campaign on Baidu – the Chinese search engine giant, I thought it would be fitting to write a post and share my views on the digital boom that is not expected to happen but is currently happening in the East. I say it is happening already because I read so many blogs that use statistics about what is anticipated to happen in 5, 10 or 15 years time, but the reality is that the growth has already started and by the looks of things the Asia Pacific market should be a very attractive target for many businesses.

A lot of people still see North America as the number one digital market and I would agree with them up to a point, but what we need to look at is the difference between internet users & internet penetration and then we see a very different picture.

Internet penetration – percentage of population with internet access in an area.

Take a moment to reflect on the data in the table below:

We can see that North America is without doubt the most “hooked up” continent in the world in terms of penetration (78%), however in terms of physical users Asia accounts for around 44% of the worlds’ entire users. North America only counts for around 13%. You don’t have to be a mathematician to see that the volume of people using the internet in Asia is much larger than North America – 650,263,554 more users to be precise. Just take a step back and think about this for a second – that number is huge – it is about 9 times the population of the UK! Imagine the possibilities of running your successful English campaigns in the same market but increasing your reach 9 times! I’m sure we would see a very sharp rise in wealthy business owners that were smart enough to choose search marketing to help them generate sales!

Sounds too Good to be True?

Well that’s because it is, at the moment. You see, internet penetration is a very important figure and can almost be used as a rough guide to a countries average disposable income levels per household.

We can see internet penetration by country in the map below:

So the point is that although Asia has around 1 billion internet users, the average internet user does not have the disposable income to buy your products (yet) – whereas North America & most of Europe do. That is why these developed markets that may have less physical users are actually the right choice for most businesses to market their products to.

So What’s the Hype about the East?

Well the boffins have been sitting behind their computers and they tell us that both China and India’s economies are growing at such a rate that within a short space of time they will be major superpowers in the world. In fact by 2025, China is expected to be the largest economy in the world & India the 3rd largest. What this means is that the billion+ internet users in Asia will have ever increasing levels of disposable income and will become very attractive prospects to market your products to on the internet.

I’m sure there are a lot of sceptics out there that see countries such as India & China that don’t really have a strong digital infrastructure outside the major cities, so therefore assume that they won’t be able to overtake the much more developed West. In response to that argument, Oxford Economics explains that one of the key factors that will help these countries grow is the multibillion dollar investment in technology and mobile communication that has been earmarked for the future. This means much more stable lines, a large increase in reliable digital business, a huge spike in internet penetration and more importantly – a level playing field in the digital environment.

The chart below shows how internet usage is expected to grow over the next few years: 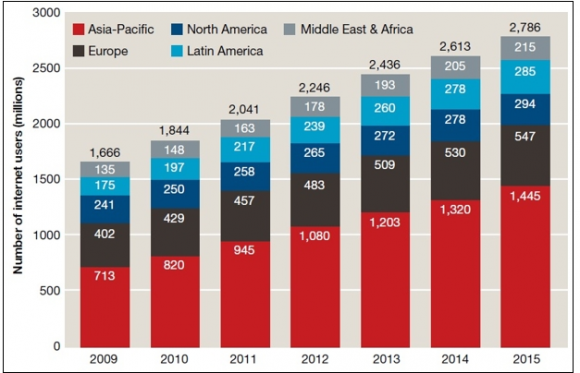 We can see everywhere is increasing but the volume in real terms in Asia is unmatched.

What does this mean for us?

I think businesses should be preparing themselves sooner rather than later for these markets. If your business can gain a presence now you will be able to adapt to the changes and amend your marketing techniques to keep up with Asia’s massive growth as it happens. One thing is for sure – in a continent with way over a billion internet users with similar disposable income levels as the US, the competition will be fierce and the knowledge that you will gain about these foreign markets by getting in early will be invaluable.

I am by no means saying that the markets in the West are going to suddenly disappear but what I am saying is that in terms of digital marketing opportunities, the East looks set to be the major player while the West may start to live in its shadow. Of course it is all relative though; the North American and European markets are strong and will remain strong. The opportunities in these markets will still be there and a well-run marketing campaign will still deliver outstanding results if you can capitalise on the opportunities. There will probably be more opportunities than is available now because these markets will be expanding also. However, with a market the size of Asia’s – can your business afford not to at least try to capture a small percentage of it?

I really believe that the growth we are seeing in Asia is set to continue and Baidu will become the first port of call for many businesses to set up their primary marketing campaigns. Mobile is going to become massive in this region and understanding the link between digital growth and economic growth is pivotal if you want to see your business succeed and grow in this exciting new marketplace.

Advertising in multiple languages and using unfamiliar search engines can be daunting for businesses. If you are interested in expanding into Asian markets or advertising on Baidu please feel free to contact us for advice. We can help you decide if that market is right for your business by undertaking thorough in-country research and competitor analysis. If you decide that that market does have potential; we can advise you on the best ways to win business in that country.