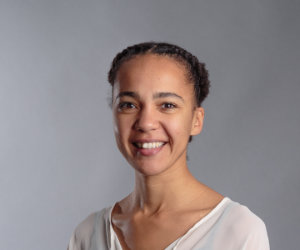 To say that the Dutch are confused about the correct spelling of words in an understatement. And never has it become more apparent to me than in the past year whilst working in search marketing.

To separate or not?

Yet there are many exceptions to the joining-together-of-words rule. Let’s look at the simple popular category of women’s coats. Eight out of 21 SERP results (incl. ads) had written this category page as one word damesjassen, the remainder all used the correctly spelled separated version dames jassen.

One of the leading warehouses in the Netherlands De Bijenkorf (comparable to say Harvey Nichols) seems so confused about the correct spelling of the category that it uses both versions. The SERP shows the category written in two separate words.

While clicking on the link takes you to their category page which is headed with just the one word damesjassen.

Most of us are actually typing in the correct way of spelling. But does is really matter when we type in the attached version damesjassen?

No, not to Google, it understands what we type so well now that for the search engine it doesn´t really matter anymore. But remember that the search engine is made for users. And even if almost 50% of us don´t know how to properly spell dames jassen, the ones who do can be very annoyed by misspellings or inconsistencies in spelling, even to the point of not clicking on a SERP listing.

So my first and foremost advice to those in search marketing is: follow the official spelling. If for some reason the official spelling is not the most searched on Google then at least make sure that you are consistent in the wording you have chosen. Never optimise for all the different options. This is sloppy and will leave your readers confused. Consistency is key! Especially since Google knows to link damesjassen >dames jassen. And as such you will be present in the same SERPS.

We Dutch don´t just struggle with attaching words we also struggle with the middle ‘n´. For instance the word briefcase in Dutch is called an aktetas. Yet it is commonly misspelled as aktentas. And while it should be perensap many still opt to writer peresap?

What about foreign words – it ought to be editen but a lot of people will jot down editten.

We should write tekst and not text yet the Keyword Planner shows a heavy use of the English variant of the word.

For all these rules there are many more exceptions. In the case of the following words it is up to the user if you spell them with or without a middle ‘s’. Dood(s)kist, drug(s)beleid, handel(s)maatschappij, tijd(s)verschil, wet(s)tekst, this list goes on and on…

If you ever find yourself wondering how a particular word is spelled then have a look at the official list of Dutch words and their spelling.

Why all this confusion?

In the Netherlands, Flemish Belgium and Surinam we follow the same spelling rules. The official gatekeeping body of our language is called: De Taalunie (The Language Union). And they have been reviewing the state of our language since 1980. And in 1995 they initiated a process to make the Dutch spelling rules more coherent by updating them every 10 years.

I remember back in 1995 when I was first introduced to the new spelling rules at secondary school. Having spent the majority of my education learning one thing I had to make a U-turn on a significant amount of spelling rules. Ten years later when the latest spelling rules changed the spelling of 2.7% of our words some of the major newspapers in the Netherlands halted and said they were not going to follow the recommendations, instead declaring that they were going to keep working with the ‘old’ spelling rules. This made the Taalunie decide not to make any spelling changes in 2015, citing a desire not to step too far away from classical Dutch as the reason. It is feared that if the Taalunie keep changing the language then in a few generations time young people won’t be able to read books from classic Dutch writers.

But tell me what’s in a name really? For dames jassen, by any other name, are still damesjassen.