PageRank – the esoteric make-or-break algorithm used to assign numerical value to webpages – was patented upon Googles conception way back in January 1998. Surprisingly, the page in PageRank never referred to web pages, book pages, newspaper pages or any other kind of page. It is in fact named after Google co-founder Larry Page. When first devised, Page promised this new link-based hierarchy would understand exactly what you mean and give you back exactly what you want.

Lawns at Google HQ are mowed by goats

Googles low-carbon approach to maintaining the Googleplex – the company’s sprawling headquarters in Mountain View, CA – involves, amongst other things, vast expanses of solar paneling, bicycles for employee use and a $5,000 electric car subsidy for its pampered employees.

In 2009 Googles pioneering vision took an unprecedentedly rustic turn when it was announced on the company blog that it had hired a herd of 200 goats from California-based goat hire company California Grazing. The benefits were clear: low carbon emissions, free fertiliser and, as Real Estate Director Dan Hoffman put it: “Goats are a lot cuter to watch than lawnmowers.” The goats (and their Border Collie herder, Jen) continue to make this annual pilgrimage to the Googleplex.

In 1999, chef Charlie Ayers was offered a job to cook for a small Silicon Valley startup. He was being offered a $45k (£27k) salary – roughly half of what hed earned in his previous job as a Hilton hotel chef in the Garden State – but the nascent company’s 52 employees seemed like a cool bunch and he was even offered stock options in case they ever hit it big.

When he left in 2005 to start his own restaurant he cashed in his 40,000 shares for a tidy $26m (£15.75m). The episode went down in history. In 2011 when online gaming upstart Zynga was at its peak, Zynga executives cited the Google chef effect as the reason they were forcing low-level employees to give back their stock on threat of dismissal.

In 2010 it changed its name to Topeka in honour of Topeka, Kansas

When Google announced it was looking for towns on which to test its much vaunted Google Fibre broadband network, municipalities around the US were invited to apply. Many argued that the application form was too simple and so towns resorted to a game of one-upmanship to grab Googles attention.

Ann Arbor, MI held a city-wide Googlefest and Greenville, SC citizens united with glow sticks in the iconic primary colours to spell Google from an aerial view. Topeka, KS (where, incidentally, its illegal to throw snowballs) went one further and temporarily renamed itself Google, KS for the duration of March 2010.

Impressed, Google announced on its company blog that it would be renaming itself Topeka with immediate effect. Eric Schmidt, CEO of Google Topeka, Inc. posted on the company blog that just as the word “topeka” itself derives from a term used by the Kansa and Ioway tribes to refer to “a good place to dig for potatoes,” we’d like to think that our website is one of the web’s top places to dig for information.

In 1996, Stanford University undergraduates and soon-to-be Google founders Sergey Brin and Larry Page were looking for a way to contain the now paltry 40GB of storage needed to run their Digital Library project – the creepily named BackRub. 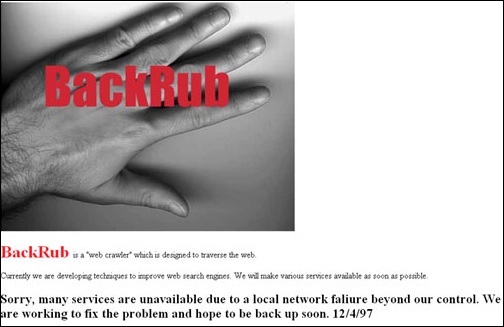 Lego provided the perfect solution to store the ten 4GB hard drives. It was readily available, easily expandable and – most importantly – hip and edgy. The famous server unit has been a museum piece at Stanford University since 2003.