As we all know from using Google day to day they are forever testing new layouts, features and tools. On 10 Jan 2012, Google launched what it calls ‘Search Plus Your World’ and we thought we would run through some of the features before they start to appear in the UK results. The changes are quite radical and it has certainly got the search industry talking this is why.

Google’s three new features focus around Google+, its relatively new social network that is growing in popularity. Google+ had almost 50 million visits in December 2011 according to Experian Hitwise data – a 55% increase in traffic against November. While uptake hasn’t been as big as it could have been (its more popular amongst the tech and web savvy community) these new changes might tip the balance for Google and encourage more wide spread use of its social network.

Google’s shift is toward personalisation of the search results – and inclusion of Google+ results in searches. If you are logged in, Google will now serve you content that has been shared with you privately, along with matches from the open web in one merged list of results. Results are based on your own behaviour online and the behaviour and content distributed within your social network.

Results from the open web, boosted by your personal behaviour

Results from the internet, boosted by your social connections

Private or “Limited” reach Google+ posts and photos shared with you

Moving forward, this change will make it impossible for businesses using search marketing to ignore the impact Google+ will have on search traffic.

Amit Singhai of Google introduced the update in a blog post, saying:

“We’re transforming Google into a search engine that understands not only content, but also people and relationships.”

Some feel that being able to search both the public Google network and your own private network at the same time is helpful and would save them time but so far from what I have read – feelings are very mixed.

First let’s look at the new features in a nutshell:

Results will include data that is personal to you and that is pulled from your social connections on Google+. Only you would ever see this set of results, and Google ensures us that private personalised SERPs are well encrypted.

Google+ profiles will now be available to view via the search engine itself – you no longer need to visit Google+ directly. Profiles will even be available in the autocomplete box that Google provides. If you search for a name, information from your network will be served up first – either people you know or people that Google thinks you should or might know. See below:

Once you have searched for a person, you will have the opportunity to add the users Google returns in the search to your circles from the SERP itself.

If you search for a topic of interest and Google+ has relevant profiles or business pages for your search these results will now be displayed on the right hand side of the page. 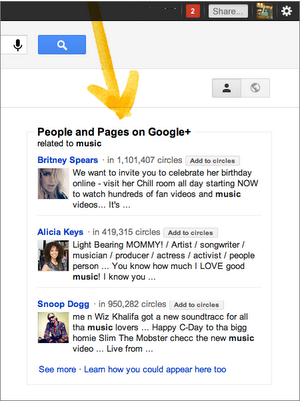 Currently changes are only rolled out on Google.com and do not extend to the mobile network. So far Google have failed to say whether the changes will roll out on Android devices which account for 50% of smartphone sales worldwide.

Opinions about Google’s changes so far:

One should remember that Google has been publishing personalised SERPs since 2005 however these changes are a little more obvious to people. While only rolled out yesterday – the news has caused a stir in the search marketing industry.

Some are unsure about what Google is trying to achieve and there have been accusations that it is warping search results and boosting the positions of Google+ posts to generate more interest in their own network. 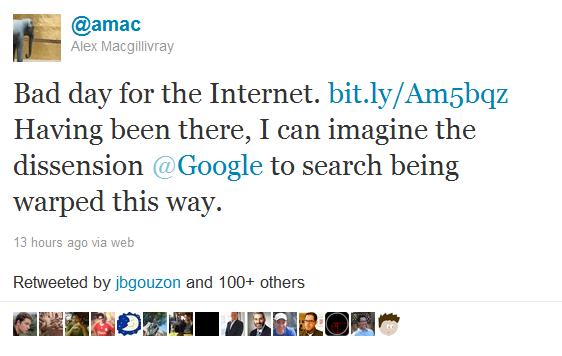 Twitter chose not to renew its contract with Google last year. Google no longer pays for access to its database and Google seemed surprised that Twitter would attack the new changes when it wasn’t prepared to share its data with Google anyway. If Twitter wants to have better coverage online for its breaking news then there has to be give and take. If none of the private social media sites are prepared to share their data then you can to some extent understand why Google has done what it has.

Google’s response on this was:

“Facebook and Twitter and other services, basically, their terms of service don’t allow us to crawl them deeply and store things. Google+ is the only [network] that provides such a persistent service. Of course, going forward, if others were willing to change, we’d look at designing things to see how it would work.”

People searching who are logged in will see significantly less of the general search results and as 90% of click throughs come from page one results – businesses are going to have to work even harder to ensure their website it visible. This in itself is one of the biggest complaints I think – people are worried that the search giant is making it more difficult for businesses to be seen (including businesses like Twitter and Facebook) and this has brought up questions over anti-competitiveness.

Antitrust issues have been floated about online– some search experts feel the decision Google have taken is a mistake – with it only showing a blatant need to promote its own social network. Previously Google would serve only the most relevant content to you – even if it did not have its own content to present it would seek out the most relevant source. Now however, Google will always promote Google+ content over and above natural content if you are logged in and haven’t opted out.

Perhaps ‘Search Plus Your World’ will be the reason that Google’s been looking for get Facebook to share its data with Google. No doubt there will be demand from users in future to include data from sites like Facebook in their personalised results.

Realistically, those marketers who until now have held off on getting up to speed with and using Google+ are going to be at a disadvantage when it comes to advertising their business. With Google+ profiles, and more importantly business pages showing up in search results it is likely that businesses with a business page would get more exposure than they did previously. Even if their website ranks badly, they have a chance to be highly visible in logged in searches if their business page is relevant to the users search. This opens up some opportunities for businesses engaged with Google+ but equally can be a disadvantage to those without a network profile. It could create a surge in signups on Google+ for businesses as they come to realise its new potential impact on natural search. Now is the time to get on board the Google+ train and if your SEO is not up to scratch it’s probably worth considering how this new competition in the SERP’s will affect your traffic.

While many businesses focus on looking after their customers and brand via Twitter, Facebook and LinkedIn offerings these changes from Google will certainly mean more marketers are forced to look at how they can use Google+ to win more business online.

Gut instinct tells me that while the press hasn’t all been positive about the changes, the actual user experience would be enriched by the change. Only a small percentage (say up to 20%) of searches are likely to be affected – this said however it would depend on the rate of uptake of Google+ moving forward. It’s no surprise to me that search is becoming more social – we have been bombarded with changes over the last few years which have all headed in a social relevance direction. We have long been telling people that social media is a big part of SEO and this will only make it easier to explain why social and SEO are so very closely linked.

Personally, I don’t mind the idea of being able to toggle between search results – it’s actually easier now to completely depersonalise your results than it was before.

We have heard a lot about what other people think but what do you think about the change – will it help or hinder your searches – make them more or less relevant in your opinion? We’d love to hear from you…

Images courtesy of Search Engine Land, Twitter and The Guardian.co.uk