Home    Insights    Internet Access and the Growth of Ecommerce

When you live in the UK, where a staggering 84% of people have internet access, it seems hard to believe that only one third of the worlds population is online. Unsurprisingly, North America dominates first place in internet presence with 79% of its population online. Next is Oceania with 68% closely followed by Europe with 63%, where almost two out of three people have internet access.

The number of internet users (estimated to currently be at around 2.4 billion worldwide) is forecasted to grow to a colossal 3.5 billion by 2017, which will be half of the worlds population. The graph below demonstrates the relative position of the top 20 countries with the highest number of internet users in 2012. As the graph surveys user numbers, smaller (predominantly Nordic) European countries such as the Netherlands, Switzerland, Sweden, Denmark and Norway are not represented although internet usage is as much as 83% or more. 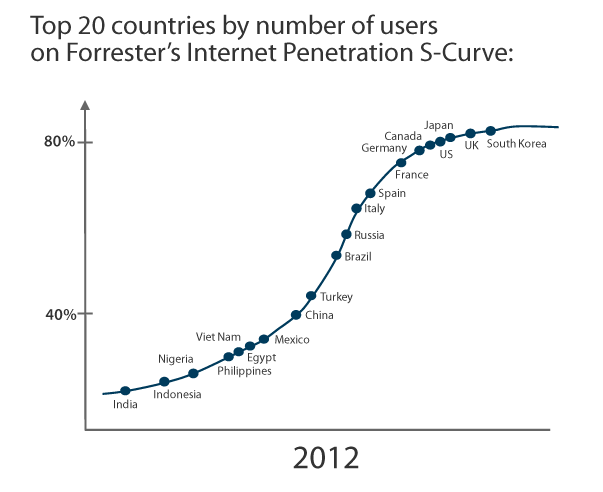 So what does this all mean and is it important? As the online population increases it will have (and is already having) parallel and enormous effects on ecommerce. Ecommerce, which has only been around for about 15 years, is booming and growing by the day. Shoppers find online spending to be a time-saving pursuit, and shopping around by comparing prices can be done with much more ease and they don’t have to put up with crowds or queues.

According to another report published by Forrester, adults in the UK are the biggest internet users in Europe with 83% accessing internet at least once a month and also being the biggest spenders both in Europe and world-wide with the average shopper spending £204 over the course of three months.

Ecommerce is charging ahead with unabated growth. Ecommerce sales are said to be growing by more than 19% each year and will be almost $1.4 trillion by 2015. Online commerce is growing at the fastest rate in Asian and East Asian countries such as India, China, the Philippines, Singapore and Hong Kong whilst simultaneously booming in Australia and Saudi Arabia.

Comparatively, European countries appear to be growing the least. The three countries to keep a close eye on for the largest predicted ecommerce growth are India, Brazil and China. An important observation is that, whilst in developed economies internet access has been predominantly via PCs and laptops, in emerging economies mobile internet users make up a significant percentage of the internet populations expanding numbers.

So what does this mean for SEO?

It means there will be a greater demand and investment in SEO services. SEO experts must be continuously innovative in understanding online consumers needs, what they are searching for and work strategically to produce what is useful for an ever-increasing online population. Dependent on the client, it is imperative that those in charge of SEO are on top of and embracing emerging (or already emerged) networks such as Sina Weibo (the Chinese version of Twitter) which has twice the users of Twitter (currently 22% of Chinas population is signed up – that is a lot of people!).

SEO strategists must be flexible – adapting how they work, observing where this has positive effects and relentlessly coming up with creative ways of gaining links and directing traffic to the clients site.