In the age of social media, a rather unpredictable phenomenon has been born, referred to by many as, viral video. Viral video is a term used to describe a video that receives a very high amount of shares and social interaction in a short amount of time.

Often these videos are unplanned but we’re seeing more and more people as well as brands attempt to harness the phenomenon to propel themselves to new heights. In reality, how successful a video becomes is unpredictable, however by understanding what makes a video go viral, you can significantly increase your likelihood of being successful.

The search engine and social video platform, YouTube is the second largest in the world behind Google. With over two days worth of video being uploaded every minute, it goes without saying that regardless of what other video sharing platforms you use, you’ll need to host your video on YouTube to make it accessible to the widest audience.

So what exactly is it that makes a video go viral?

Kevin Allocca, trend manager at YouTube says that the success of a web video can be put down to three things : “Taste-makers, communities of participation and unexpectedness.”

Of course, we’d be crazy to disagree with Kevin, however we actually think he overlooked another major reason in addition to the above and that’s great content. Without great content none of the above would matter – so in terms of web video, what is great content?

Contrary to popular belief, great content isn’t necessarily high quality video. There are countless examples of videos that have gone viral despite the fact that they were shot on a cheap handheld camera. It’s true that greater quality improves the viewing experience but this really only comes in to play when trying to develop an audience that returns time and time again.

Unlike video quality, better audio quality is more of a requirement. If you’ve ever watched a video in utter silence, you’ll know that you’re simply not able to process what’s happening without some sort of visual assistance. In the same respect, if the audio is too loud or inaudible, the viewer is likely to turn off regardless of what they are being shown. Removed from that, the audio doesnt need to be perfect, but good enough to grasp what is unfolding.

At this point you might argue that Vine and Instagram video are successful despite them being largely silent, but with the videos being up to six and fifteen seconds respectively they are forced to tell a visual story.

Who are the taste-makers?

Taste-makers are our friends, family members, popular websites and, most importantly, the social influencers that share content. Without them there would be no way for a video to be seen by the masses.

Here at Search Laboratory, we have our very own viral video curator, Leanne Orr, whose YouTube cover of Carly Ray Jepsens’ Call Me Maybe currently sits at 3.5 million views. Leanne has given us insight into her video and some factors that help with increasing the chances of your video or content becoming viral.

You’ve probably heard it a million times, but SEO really does come down to creating good quality content  –  and the better the content is, the more likely it is to go viral!

In my experience, creating a three-minute video has generated a few days worth of brand mentions to follow up all over the web, not only from blogs who are talking about the video but high authority sites like magazines, news sites, radio stations and so on. 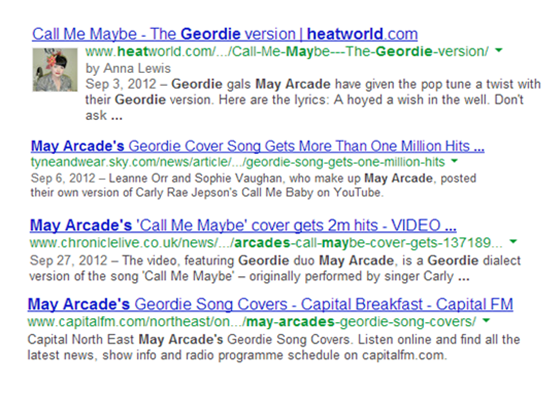 With SEO, its important to let the content do the work for you – whether this is in the form of a video, blog post, infographic or an article, it really doesnt matter. If you have something unique or resourceful to offer then that’s what counts.

There were some major factors at play that contributed to the success of the Geordie video and I thought that sharing these would be beneficial for those looking to plan a video or content with the intention of this going viral.

At this point, I should reinforce that viral doesn’t mean getting three million hits – but just getting your content circulated around the internet rapidly.

It might sound obvious, but your video isn’t likely to go viral unless you make it appealing on the broadest possible scale. The more people your video can relate to, the more potential viewers you will have. In our case, we managed to attract so many views due to the fact that the song was a huge hit worldwide. We received coverage from breakfast shows in Australia to celebrity gossip bloggers in America!

If you’re going to plan a video campaign and you want this to go viral, you need to think of how you can make it interesting for viewers in as many geographic areas as possible; something that often gets overlooked in a marketing campaign. A good example of this is the Coca Cola Happiness Machine, where this was repeated in many different areas of the world.

You also need to think about who your video or your content will appeal to – don’t be scared to reach outside of your brands target market, and when you’re planning your content, think of the limitations and ways you can overcome them.

Remember that your content/video will only get so far if it is targeting a certain type of person, profession, interest or language. The Geordie dialect isn’t the easiest to understand, but our video was a complete translation of the ‘Call Me Maybe’ song – so our video ultimately taught a fair few people how to speak Geordie! The metrics below, taken from our video indicate that it engaged with almost all age groups. 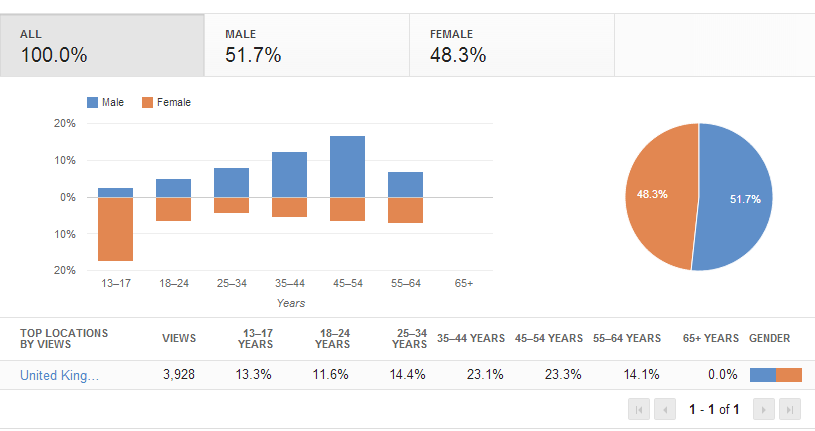 Behind every successful video (or written piece) is a viewer who had a connection with the content and felt the need to share this with others. If it makes you laugh hysterically, you are likely to pass it on to someone else. Your content can be compelling like the KONY campaign or funny, yet nostalgic like the Skittles campaigns, but the point is that you need to connect with your audience. Begin by deciding what kind of response you want from your viewers or readers through your content, and then find your original hook that will give them a reason to share it with others.

Although the Geordie Call me Maybe video was shared naturally and went viral without the need for us to promote it in the early stages, we still didn’t leave the video to its own devices. Instead we helped boost the videos performance by putting it in front of our taste-makers because we knew that a share from just one of them would instantly get the video seen by a wider audience which worked very well. 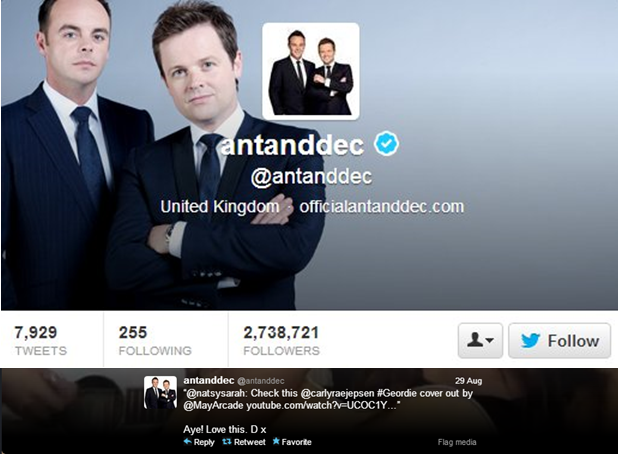 We used Twitter to contact high profile Geordie celebrities that we knew could connect to our video, like Ant and Dec, Denise Welch, Little Mix, Cheryl Cole and so on. The majority of the celebrities we outreached to re-tweeted the video to their fan base which helped our view count substantially.

The comparative graphs below taken from our YouTube analytics show that though our video was having modest success, the day following the initial interaction with the power taste-makers saw a significant jump in the all metrics; particularly those from Mobile apps and direct traffic. We believe this to be a direct result of the interaction with the celebrities. 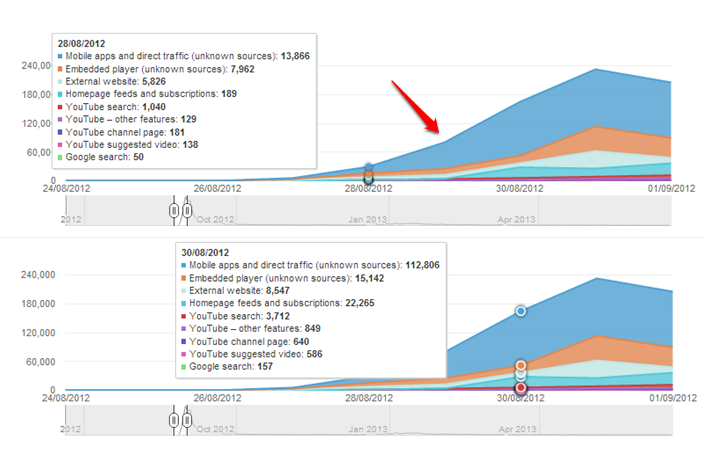 Sometimes, it might take someone influential to get your content recognised. If you don’t get the response you were expecting, reach out to those that your video is relevant to that have a large following in order to help.

Social following does not impact SEO (you can still perform well in the SERPs if you have a small social following – anyone can buy followers!) – but social media works hand in hand with SEO, as it is channels like Twitter and Facebook that ultimately give exposure to the content you create.

This post wont guarantee that your content will go viral, but it certainly helps to understand what makes a viral video and how you can increase your chances of creating your own. The rest is up to you to come up with your great idea, understand your audience and create your hook and get it out there.