Net Neutrality and What it Means to You

Home    Insights    Net Neutrality and What it Means to You

What is Net Neutrality?

Net neutrality is the infrastructure of the web and allows your website to run smoothly. However, net neutrality is under debate. The consensus will significantly alter the way the Internet is structured, and therefore hold great impact for any business and end-user on the web.

Net neutrality means that all online data should be treated the same. This may seem quite vague, but it basically entails that Internet Service Providers (ISPs) and governments can’t discriminate traffic based on user, platform, or content.

At first glance this principle seems positive for everyone. However, the debate is on-going and centres on the data management of ISPs. They claim that they can improve their service by charging extra for websites that use a lot of data.

When you’re watching Netflix for example, you expect high definition screen resolutions. Netflix can guarantee that by paying the extra fee to their ISP, after which its data is prioritized over other data. Thereby making sure you’re watching your favourite show at the highest resolution possible. ISPs thus claim that by charging this higher price, they can make the web run smoother.

In turn, advocates of net neutrality claim that such data management practices give ISPs too much power. Essentially, they take control over what data is regarded as more important than other data. This does not only mean that online services on the higher fee will get faster broadband, but it also means that website owners who do not pay the fee will get slower website speeds. End-users especially, but also entrepreneurs and other online stakeholders are thus bearing the brunt of this new online infrastructure.

On top of that, this points in the direction of unfair competition. ISPs can intentionally slow down the online services from their competitors. Think of free internet calling services like Viber that are slowed down because they compete with ISPs that also provide phone packages, such as Virgin Media or TalkTalk. The graph below is an example of how Comcast is already using such techniques to get other companies to do what they want. 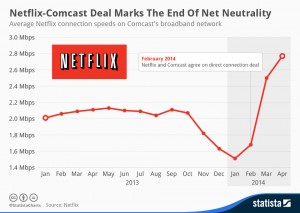 Besides, Amazon, Microsoft and Google point toward the threat of higher entry barriers: ‘An end to net neutrality would allow existing players to simply pay for better service, beating start-ups with their wallets rather than their ideas.’

What does this mean for you?

A law ensuring net neutrality was proposed in the EU last year, but has not yet been passed. And by the looks of it, the ‘telecom package’ that would guarantee net neutrality is facing a restart. The EU has not yet taken a stand, but seems to recognise the importance of the principle.

In the USA however, the debate is fiercer. Even though President Obama articulates the need to follow the European example, the USA has not taken concrete steps to ensure net neutrality in the future.

Major telecom giants like Verizon, AT&T, and Comcast, are enormously powerful corporations that aggressively try to withhold such a law to be passed. Not only do they try to influence politics with lobbying, (Comcast, with over $18 million, is the second largest spender of lobby money), they have also sued the US government in order to pass a law that could make them charge fees for favourable data management, and they are threatening to do so again. On top of that, the next chair of the Federal Communication Commission is the former top lobbyist for cable and wireless companies like Comcast, AT&T and Verizon.

On the whole, net neutrality is a majorly significant factor in how the Internet operates. It has influence on all online users and stakeholders.

Even though the European scenario seems more positive, the American future of net neutrality is an unpredictable and unstable one. The American trend will undoubtedly have impact on the European way of doing things and the way the Internet is structured globally. The laws surrounding net neutrality are hard to predict, and therefore hard to adapt to. Online growth will, maybe, become much harder than it is today. So grow now.