How A Landing Page Complements a Creative Campaign

Home    Insights    How A Landing Page Complements a Creative Campaign

December is that time of year for retailers to start canvassing their stories with all kinds of assorted, sparkly, and shiny decorations. Trees are erected and covered in tinsel, spray snow on all the windows and Christmas tunes played back to back. Thoughts of what presents to buy loved ones and friends are slowly entering the minds of consumers.

December is also the month we begin to see Christmas TV adverts popping up from major retailers, including Mulberry, M&S, ASDA, etc. Last month we also saw the release of the most anticipated ad of all time by John Lewis.

Story telling has become a big part of advertising, which is no surprise considering we are seeing the simultaneous growth of content marketing. Depending on the brands objectives, the majority of the adverts – Christmas or not – are still pushing the “sell, sell, sell” message. These types of ads are quickly forgotten and with it, the message they were trying to convey. In retrospect, ideally you want something more memorable, an advert with story and depth so that people will search for it, watch it again and share on social media how they feel about it. In return, this raises brand awareness and is a much more effective approach to marketing.

Take John Lewis’ #MontyThePenguin for example, which has over 23 million YouTube views to date. The advert was premiered on social media and then on TV a day after during many popular TV programmes. The advert received waves of social mentions throughout November all the way up to Christmas. These mentions had one common theme – heart-warming. Not only that, the organic search for the advert spiked throughout November.

Here is the search terms on Google we looked at from the UK:

As you can see, the advert resulted in extremely high search score for John Lewis. The retailer also created a landing page to host the video and other information about Monty The Penguin. As people already bought into the character, John Lewis utilised this opportunity to promote their real objective – to sell products: Monty’s merchandise, aka Christmas presents.

From the SEO’s point of view, a landing page for your campaign is extremely important, it gives a reason for a webmaster to link to your page to provide more information about your campaign. It’s even more important for video content because without a landing page on your website, webmasters will just link to your YouTube video, which is fine, but then at the same time, you’re losing out on traffic and other important call to actions.

Let’s dissect the landing page into a few sections to analyse how John Lewis had utilised various tactics to target consumers: 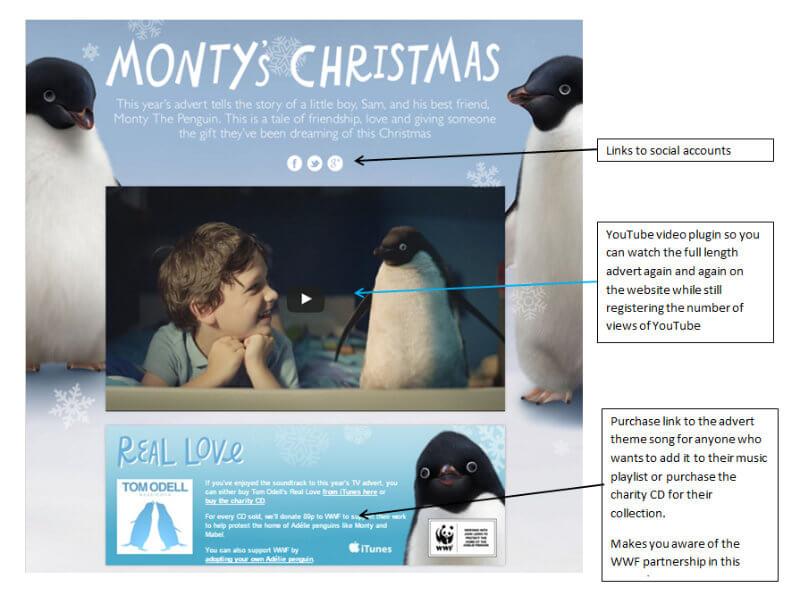 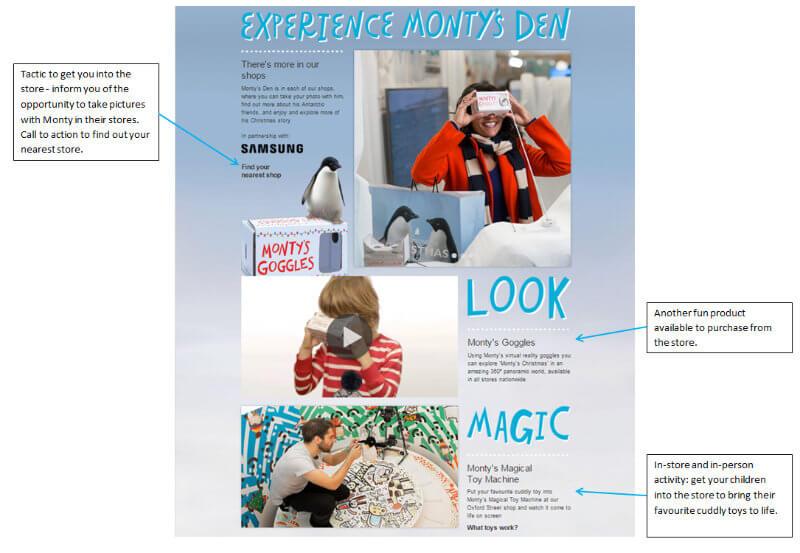 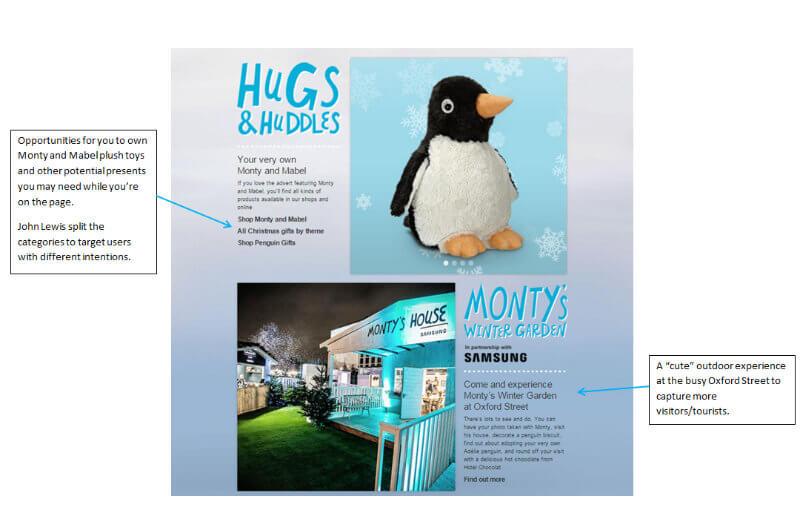 As you can see there is so much more you can squeeze in a well designed landing page. You may often find yourself trying to put every single bit of information into your press release, video advert, posters or other marketing material, but might not be able to. Why not just create a landing page which will track the progress and success of your campaign by using Google Analytics?

Monty’s page has generated an estimated 1898* backlinks to date. These backlinks have not only yielded the crucial domain authority for the website but they have also provided a consistent flow of referral traffic back to the landing page and John Lewis domain.

The page has also received 34,000** overall shares across various social media platforms and the #MontyThePenguin hashtag was used more than 90,000 times in its first day of launching.

As John Lewis was well aware that the campaign would bring on the “Monty-fever” effect, they created separate Twitter accounts for Monty and Mabel (Monty’s partner) to handle this particular social engagement and conversation. This tactic enabled John Lewis’ official Twitter account to operate under business as usual. 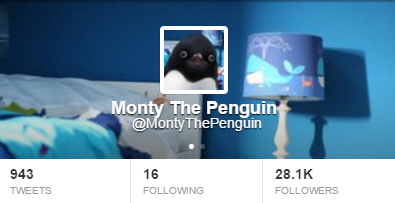 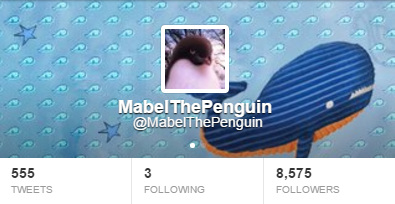 From a brand awareness point of view, this campaign has raised the level to an all-time high outside of their typical demographic. YouGov shows that the people who are sharing the video and mentioning the hashtag are not typical John Lewis customers. 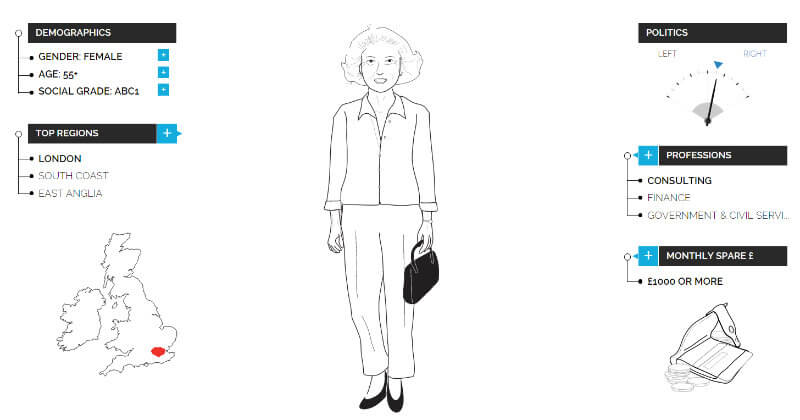 What could be better than penguins and christmas?! Get in there #montythepenguin @johnlewisretail @aandeddb Absolutely love it!

Oh dear I just cried on the train watching the #johnlewischristmasadvert #montythepenguin advert – they have done it again!!

Apparently #MontyThePenguin is sold out but I feel like my love 4 penguin clothes & accessories will compensate that pic.twitter.com/zdSnwtRnog

#MontyThePenguin was an integrated campaign, the retailer had also written a book to tell the story of Monty, they created an interactive 360 degree panoramic view into Sam & Monty’s world, a mobile app, a physical Winter Garden to visit at Oxford Street and worked in conjunction with the charity WWF to raise money for the conservation of penguins. It was an excellent way to capitalise on the original advert.

From what we can see from Twitter, the Winter Garden was doing tremendously well not only with footfall but social engagement with people uploading pictures from their visits using the hashtag.

To date, Monty the Penguin’s landing page is still the number one on Google SERP when you search for keywords such as “Monty Penguin”, “John Lewis Monty” or “John Lewis Penguin”. 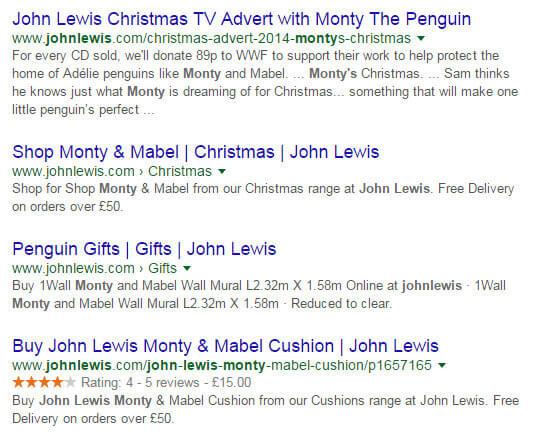