Charade, out of control, and a cabbage: what are Europeans searching about Brexit?

Home    Insights    Charade, out of control, and a cabbage: what are Europeans searching about Brexit?

It’s been three years since Britain voted to leave the EU. While there are strong opinions on both sides of the debate of what we want to see, it’s fair to say we’re still none the wiser on exactly what Brexit means for the future.

It turns out it’s not just Brits who are unsure, either; people in the wider EU are questioning the same things we are. Or are they?

As an international agency, we are always interested in knowing what different cultures think and feel. In 2016, we used Google Autocomplete to find out what people in Europe were Googling about Brits. Despite being in the heart of Brexit discussions, Europeans were more interested in matters such as “What do Scottish people look like?” and “Why are the English crybabies?”.

Two years on and Brexit discussions are still taking place in every household across the UK, so we wanted to see if European attitudes towards Brexit might have changed over time. Just like last time, our international SEO department utilised Google’s Autocomplete feature to find out what some of the EU’s biggest countries were looking up about the UK.

What do Europeans search about Brexit? 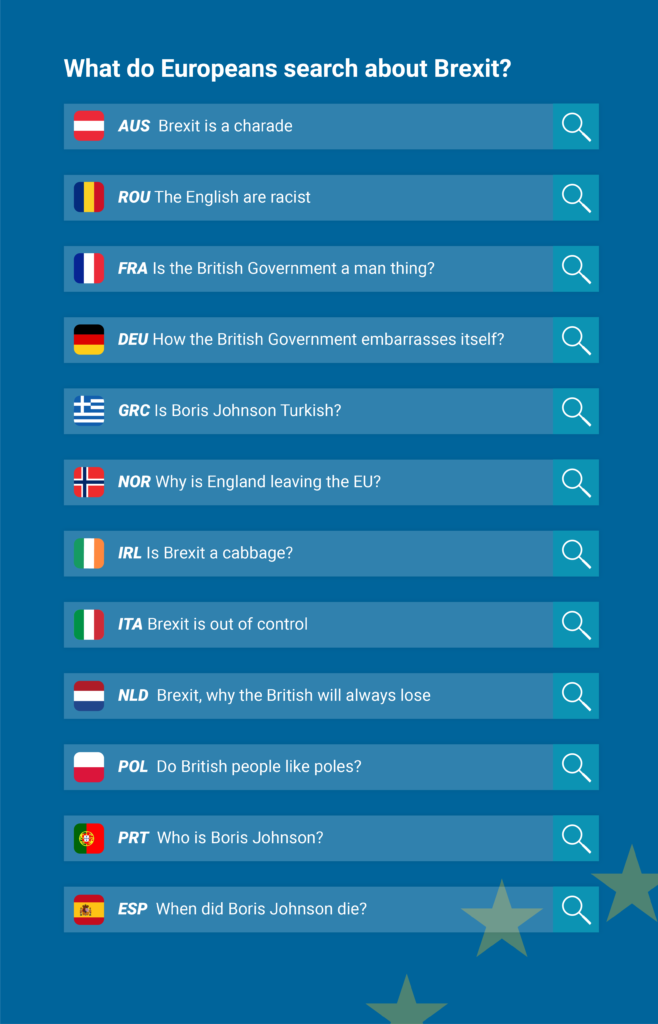 France, Germany and The Netherlands

Is the British government a man thing?

In 2017, France announced they had voted a record number of women to parliament. Of the 577 members, 223 were female, taking the French to 17th in the world rankings of female parliamentary representation.

This search query could be our neighbours taking a dig at us for our lowly 39th place in the rankings. Despite our previous Prime Minister being female, just 32% of the British Government is made up of women.

How the British Government embarrasses itself

It seems that the Germans aren’t big fans of how our government are handling the ongoing Brexit negotiations. In their defence, it has been three years – with not a lot to show for it, which could be why this appeared as a popular search query.

Brexit, why the British will always lose

The Dutch share the German’s a similar lack of optimism, although when it comes to Brexit, they are more concerned with the end game than the discussions. As one of the six core states that founded the EU (then called the European Economic Community) in 1957, it’s clear that the Netherlands believe staying in the EU is a better option for Britain than leaving.

Brexit is out of control

It’s clear that the Italians feel Britain has bitten off more than we can chew with Brexit, with “Brexit is out of control” showing as a popular search term in Italy.

When did Boris Johnson die?

It seems that the Spanish believe Boris Johnson is dead and are curious to find out when.

Who is Boris Johnson?

On the other end of the spectrum, the Portuguese know Boris is alive but are clearly confused as to who he is. Boris has been dominating the UK media since becoming Prime Minister and it appears the headlines have caught the attention of the Portuguese.

Brexit is a charade

Rather than being concerned with the Brexit opinions circling Europe, the Polish are simply worried about whether British people like them. Poland and the UK have a good relationship but as with many countries in the EU, this has been thrown into uncertainty by Brexit discussions.

Ireland: “Is Brexit a Cabbage?”, “Brexit is Ireland’s fault”

When looking into what the Irish are searching regarding Brexit, we discovered some interesting queries, such as ‘Is Brexit a cabbage?’ Although some Irish may genuinely want to know if Brexit is a type of cabbage, it’s more likely that the query can be explained by a myth that says the EU has forced a number of regulations on cabbages over the years.

What else are Europeans searching for?

Moving away from the topic of Brexit, our team also found some more light-hearted Google search queries from around Europe. Here are some of our favourites. 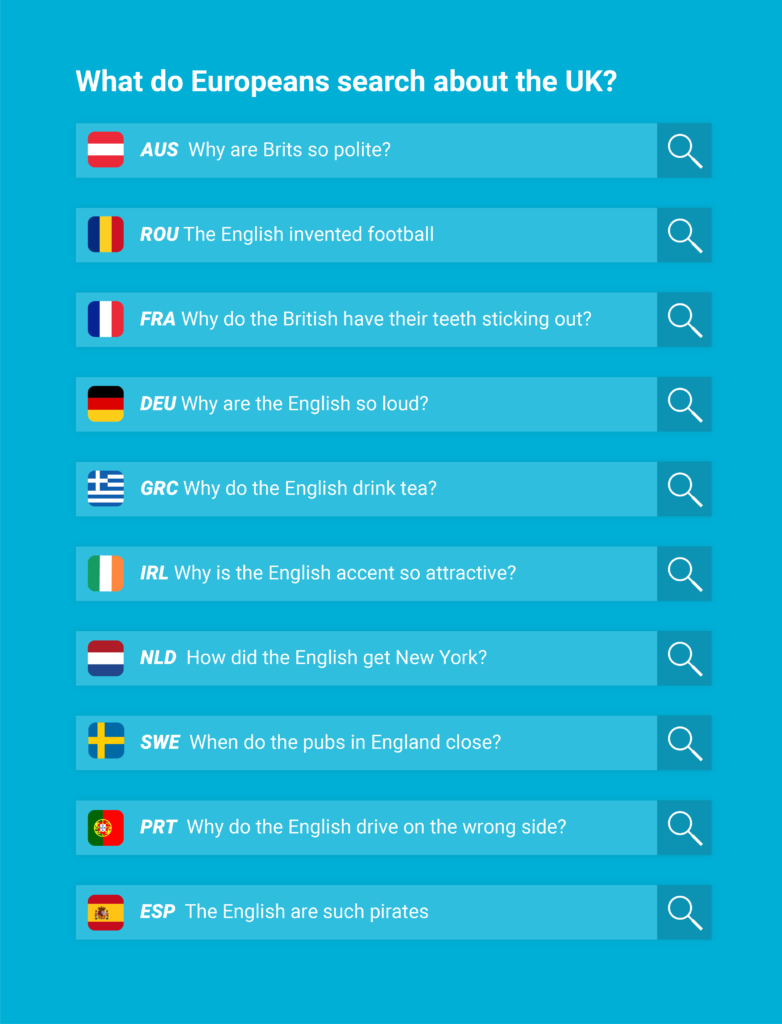 Why are Brits so polite?

Austrians are turning to Google to find out why Brits are so polite. Manners are very important to us over in the UK and it can lead to us saying thank you over and over or dragging out a phone call as we exchange goodbyes multiple times.

When do the pubs close in England?

Either Britain has a reputation for late nights, or Swedish holidaymakers have made their priorities very clear; one of the most common search queries in Sweden was “when do the pubs close in England?”, a very valid question.

Ireland: Why is the English accent so attractive?

A complimentary search query from the Irish is why our accents are so attractive. Of course, there isn’t a singular English accent so we’re keen to know which one they mean.

Why are the English so loud?

It looks like Austria isn’t the only country where we have a reputation for being loud. Whether it’s a football away day or a visit to Oktoberfest, it doesn’t come as too much of a surprise that the German people’s impression of the Brits is that of high volume.

The English are such pirates

An interesting description which could have many meanings; are the Spanish are talking about historical events, or simply our liking for a drink or two of rum while on holiday?

What are we searching for about our fellow Europeans?

Germany: Is Germany a country?

This is a common query many of us are googling about Germany, suggesting it might be time we brushed up on our geography.

According to a survey, Spain is the 17th sexiest nationality in the world. It would appear they have caught our eye as Brits are turning to Google to find out what Spanish men find attractive.

Despite Spain ranking an impressive 17th, the English came out as the 9th sexiest nation.

Italy: Why do Italian’s talk with their hands?

With a reputation for being a passionate people, and a popular meme showcasing ‘the Italian hand’ circling the internet earlier this year, many of us here in the UK are questioning why Italians talk with their hands. We all express ourselves differently, so it might be tricky finding an answer to this one.

France: Do the French hate the English?

A bit of a rivalry has always existed between the French and the English and it seems this has led people in England to check whether our neighbours hate them or not.

Luckily the rivalry nowadays is mainly kept to sport, and we like to think we have an amicable relationship with our French friends.

We hope we managed to provide some of the interesting and amusing perspectives our European rivals have on us. If you have any more questions to add about the UK, let us know on Twitter, @searchlabs, and we’ll see what we can do to help!