Penguin Panic and Panda Phobia, a Q&A on the Google Update & What Negative SEO is

Google’s latest round of updates has sent a wave of panic through the SEO world. Admittedly every publicised update leads to claims that ‘SEO is dead’, ‘Google has ruined its organic search’ and so on. But this time round we have actually seen some fairly dramatic changes. A number of sites have been hit harder than expected. The subject has been extensively covered on a number of SEO blogs, but as the dust clears we are getting a better idea of the impact and what can be done.

A brief timeline of events is as follows:

On April 16 a number of websites were caught by a bug which mistook them for parked domains. The most dramatic example was Seer Interactive, a highly respected Search marketing agency which completely vanished from the organic results for a day. Then on April 19, Panda 3.5 was rolled out. The dreaded Penguin officially came out to play on April 24. Then on April 27 Panda 3.6 went out, but this was a fairly minor run.

The bug was fixed within a day, and isn’t really worth worrying about. The key issue is that they can and do happen. When they do there isn’t much you can do about it beyond waiting for it to be fixed but on the bright side they are usually fixed fairly quickly.

Pandas 3.5 and 3.6 are updates to Google’s algorithms that target duplicate and thin content. SEOmoz has a great post covering the basics of Panda updates and what can be done, and of course, we have our own take on Panda. 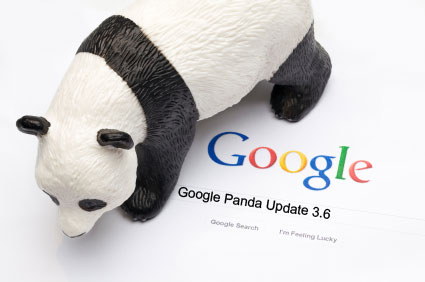 What was genuinely new was the Penguin update which is targeting ‘over optimised’ webpages. We don’t know everything that it is looking at (read this useful post from Search Engine Roundtable), but one of the clearest targets was link spam. By link spam I mean unnatural links. For example paid links such as ‘made for SEO’ directories, blog networks like ‘Build My Rank’ as well as exchanging links with unrelated sites all count as link spam.

Will it affect my rankings?

Well if it hasn’t affected your rankings yet, then you probably won’t be hit this time. However there is quite a lot of evidence that sites that shouldn’t have been hit have been. The most egregious example was Viagra, where the official site disappeared from the search results. For a critical overview of Penguin’s effect on the rankings Search Engine Land has a great article. Aside from a number of people complaining about their rankings being affected Google has put out a form for webmasters who think that their site was hit unfairly, which suggests that it might have had a broader impact than expected.

My site got hit, what can I do about it?

The main issue at hand is of course what to do if your site has been targeted. The first thing is to look for the most likely cause. Just because your rankings have fallen since April 24 doesn’t mean that that it was Penguin which knocked your site down. The Panda updates are also likely culprits. However there are some key clues we can use to find out if it was a Panda or a Penguin which hit you.

Penguin victims will probably, but not necessarily, have received an unnatural links warning notice a couple of weeks before their site got hit (this would have appeared in Webmaster Tools). Even if you haven’t it is worth checking your backlink profile to look for two things. The first is for paid links. Examples of these are low quality directories, blog networks or footer links. Alongside paid links it’s worth adding that if you have a link exchange page, then you really need to take it down.

The second is to look for an unnatural anchor text distribution, for example if the site “delicoussweets.com” has lots of backlinks with anchor text “chocolate fudge” but not many with different anchor text then this is prime spam signal. Basically if your site has a lot of keyword rich anchor text, then it’s going to look very suspicious to any passing Penguins.

If you have either of these signals, (and if you have one you’ll probably have the other) then you have some work to do. In some ways this means going to back to basics. For spam links you need to try to get them taken down. This is a fairly simple, but time consuming process. Once you have a list of your backlinks then it’s a matter of going through them and contacting the webmasters of sites which host bad links to yours. Once you have got rid of as many as possible then you can issue a reconsideration request to Google detailing what you have done to make your link profile as natural as normal.

You will then need to get back to link building, which I’ll talk about a bit later.

I’ve been hearing a lot about Negative SEO, is this related?

The obvious worry that comes from the penalties that Google is attaching to unnatural links is that it is very easy to buy a load of keyword rich anchor text links and point them at someone else’s site in the hope of giving them a penalty. This is also known as negative SEO or Link Bombing. There is some evidence that this can work, but it is far from clear. The biggest case so far was experiment targeting Dan Thies’ site (SEO Fast Start) with exact match keywords for four phrases. On the 22 March 2012 SEO Fast Start ranked as following for the keywords below.

At first glance the results appear pretty conclusive with SEO Fast Start falling several places for the last of the keywords that they targeted. The problem is that at the same time Thies made some changes to his site that may have also had an effect on one of the rankings (SEO Book). For the other two rankings they had shot up to their locations after someone else had built 5000 guest post links to his site starting on the 18 March. According to Thies this had pushed up his rankings for SEO and SEO services for a while before they returned to normal. There have been a couple of other cases such as an attack on a site called www.justgoodcars.com, but again this example is problematic. In this case because ‘justgoodcars’ already had some poor quality links and thin content the penalty might well have been applied for different reasons.

If negative SEO does work, and I’m not convinced it does – how do you defend against it? Well you can’t stop someone trying to attack you but buy building a good website with a great link profile you can make it much less likely to be effective.

Websites such as https://ahrefs.com/ can give you a link graph showing the number of links over time for a website. If you suddenly gain a load of links for no reason then it’s likely that someone is targeting your website. You can then send Google a pre-emptive reconsideration request to prove that it’s not you doing it, but a good site will probably be a better defence. Rand Fishkin has done a great video on negative SEO which is worth watching if you’re worried.

Has this changed SEO?

The most obvious change is that link building tactics such as paying for links and directories, as well as article submissions, have become a lot more risky. I won’t say that they don’t work at all if that is the way you wish to go, but the risk is far higher than it used to be. Instead, a focus on gaining high quality, relevant links is essential in our opinion. Gaining these links is hard work, but that is why they carry far less risk and more long term reward.

The key is producing high quality content, whether that is articles, videos, illustrations or whatever else you can produce. This content is both for your own site to establish yourself as an authority and for other sites to spread the word. Good quality content will also make it far easier for you to interact with the public over social media and diversify your sources of traffic. White-hat SEO after Penguin is the same just even more important. Black-hats may well need to have a bit of rethink.

Tell us your view on the latest Panda and Penguin updates. Has your site been hit and if so why do you think it has and when did you notice the fluctuation? All comments welcomed.