Google removes right side ads, but how will it affect your PPC campaign?

Home    Insights    Google removes right side ads, but how will it affect your PPC campaign? 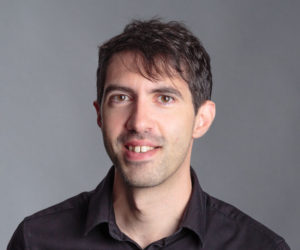 Between the 18th and 22nd of February, Google started phasing out the display of ads on the right-hand side of search result pages. With the exception of Shopping Ads results, this ad space was removed meaning there could be a maximum of only 7 ads on a SERP. These ads were replaced by a fourth ‘top’ text ad for “highly commercial queries”. See here for more details.

While Google often makes changes to its algorithm, changes to SERP layout are less common. So how will these changes affect you? Here, we’re going to look at the impact that we’ve seen across our client campaigns in the first fortnight since the change. We’ll be looking exclusively at desktop results on Google (so excluding search partners) for keyword-based campaigns.

Firstly, the obvious: with the additional fourth ‘top’ ad slot now available, text ads are now more likely to appear at the top of the page above the organic results, as can be seen below: 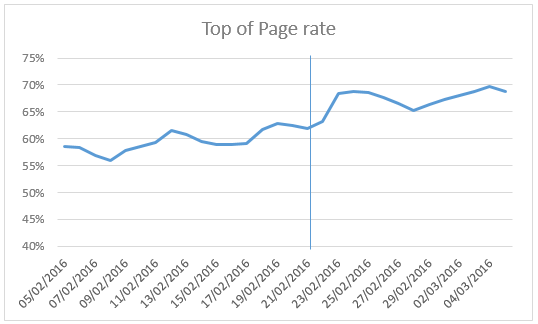 As a result, there are two perhaps predictable consequences: average positions are better, and click-through rates (CTRs) are better, as illustrated below. 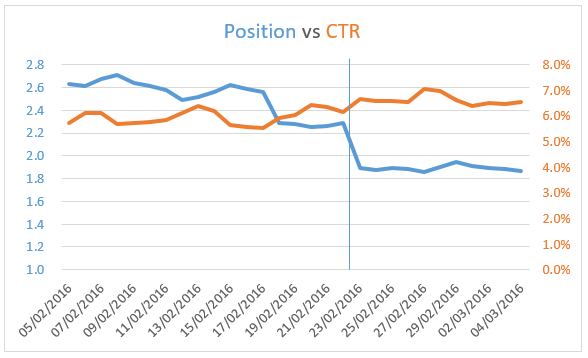 The improved average position is actually a bit of a ‘ghost’ statistic: it doesn’t really mean anything. This is because we can expect the average position for every advertiser to improve, simply because positions 7+ have been eliminated from the first page of results. Ads that were previously in position 7+ now miss out on their impressions (except for those few hardy souls who make it to page 2), so no longer contribute to the stats.

The improved click-through rate can be attributed in part to the same phenomenon. Impressions are now very rarely being accrued in those positions (7+) that were least likely to lead to clicks before the update. There’s also of course, the significant additional benefit that ads are more likely to appear above the organic results – a premium spot where better CTRs are very likely.

The immediate fear of many when Google implemented this change, was that CPCs (costs per click) would increase as advertisers fought it out for the limited spaces now available at the top of the page. At the top-level, we haven’t really seen this yet, though as we’ll see later there are some different trends around positions 3-4. Hopefully, this means that other advertisers have been holding their nerve and prudently bidding based on what each keyword is worth to them, rather than risking getting embroiled in any bidding wars. Then again, it is still early days so we will have to wait to see if this trend continues. 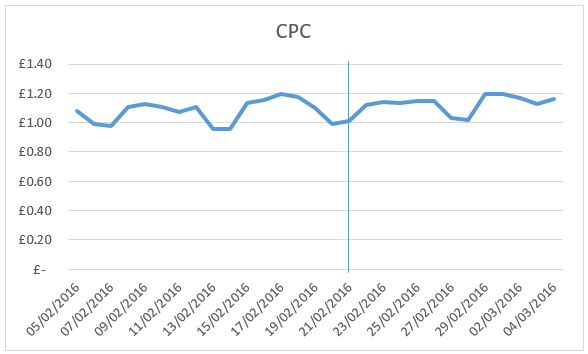 One thing we have seen is that impressions are down. Again, this was largely predictable: there are less page 1 ad slots in total, so of course there are fewer opportunities for advertisers to garner impressions. Fortunately, the loss in impressions is made up for by improved click-through rates, so we’re seeing click volumes actually remain relatively stable: 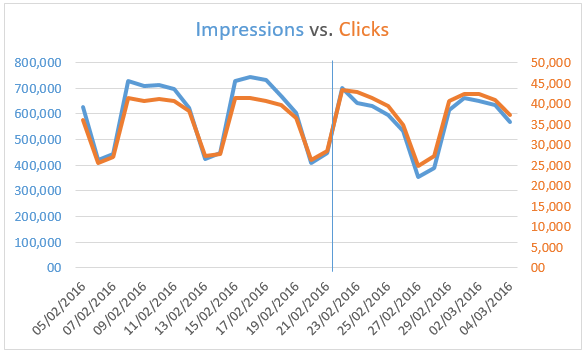 Keywords with average position 3 have greatly benefited from the change. Remember, an average position of 3 covers a range of slots, so these ads will sometimes appear in position 1, and often in positions 4+. Since these keywords have always existed on the cusp of the top of the page, having the availability of the 4th position ‘buffer’ below them (even though it’s not always there) greatly increases their chance of appearing somewhere in the top zone. This is also reflected in improved CTRs and traffic: 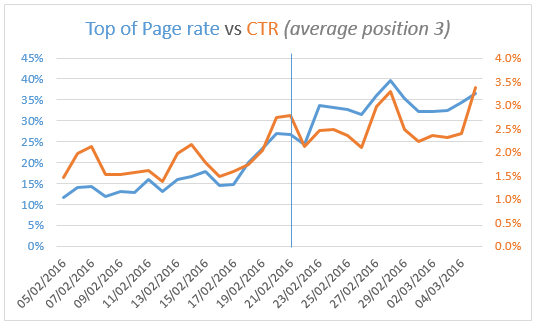 Although there hasn’t been a significant change in the top two positions, we have seen CPCs on the increase for the third position. This may be because advertisers that were previously content with position 4 or 5, to be at the top of the right-hand column, have upped their bids to ‘guarantee’ visibility above the fold. However, this could also simply be another direct consequence of the loss of positions 7+. Since the cheapest positions are no longer available, the average click price can’t help but increase, even if clicks for any particular slot aren’t actually changing at all.

In any case, we’d certainly advise sticking to the usual strategy of bidding depending on the value of the keyword to your business, irrespective of position or competitor activity. 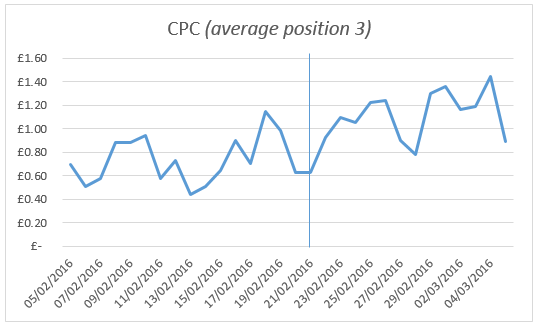 Ads in average position 4 are in an odd situation. These ads are now more likely to appear above the organic results than previously, and so CTRs are up due the prominence of these spots. At the same time, they’re also more likely to not make it onto page 1 at all, which explains why we see impressions falling. These opposing trends (increasing CTRs and decreasing impressions) are actually just about cancelling each other out, leaving click volumes pretty stable. 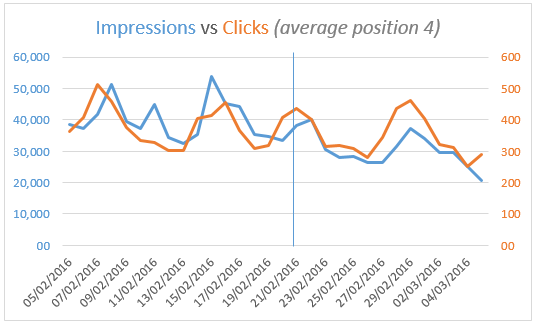 It’s keywords in positions 5+ that have really suffered. We’ve seen impressions for ads in this position drop off a cliff for obvious reasons (we’ve seen lost impression share jump from sub-70% to over 80%) – but clicks have also been hit hard. Ads in position 5 or 6 might previously at least have been at the top of the right-hand column of ads and so visible without requiring the searcher to scroll, yet now they’re languishing at the very bottom of the page, and it shows: 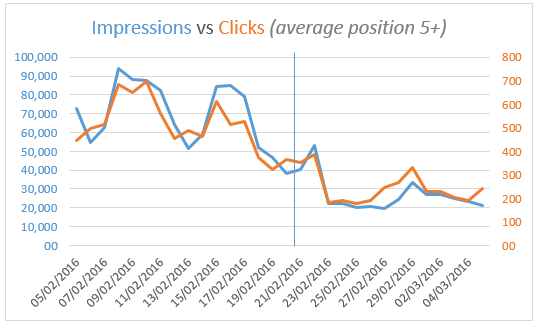 While there have been some very clear trends since the removal of the right-hand side ads, there are still some questions that remain unanswered:

Now, search never sleeps, so it may simply be that the above anomalies are artifacts caused by changes within particular accounts over recent weeks. There’s no way to know for now, but we’ll continue to gather data and provide further updates on any new trends we spot in the coming months.