Most organisations have thrown themselves into social media as a marketing and PR tool; it’s an ideal way to engage people, much cheaper than traditional media advertising and in some cases more effective.

What social media allows brands to do is engage immediately and informally with members of the public. One of the most successful companies when it comes to doing this is O2. Not only does the mobile service provider routinely engage with its social media audience in a friendly way, O2 seem happy to break “the rules” by responding with humour to comments that most companies would ignore. 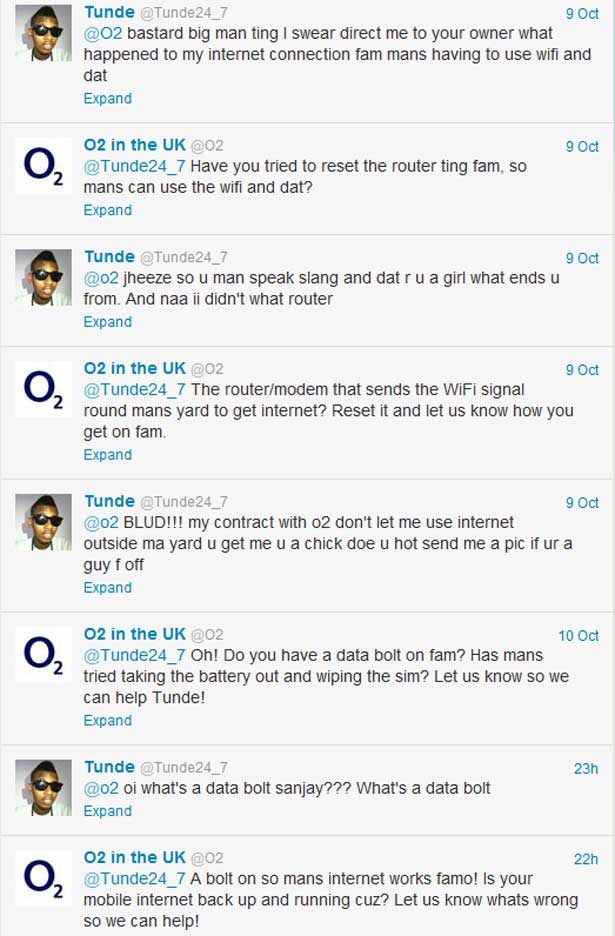 During its service outage last summer, when network problems caused hundreds of thousands of people to lose signal completely for 24 hours, O2 used Twitter to directly engage with its justifiably angry customers.

In a situation where many brands would have put out a blanket statement or apology before maintaining an ominous silence until the crisis had passed, O2 responded in an unprecedented way to the veritable mountain of criticism it received with humility and humour.

Tweets such as: “O2 We’re still waiting for that apology or maybe they texted me and I can’t see the message because my phone DIDN’T WORK,” received a genuine direct apology.

Even the more vitriolic, “O2 F**K You! Suck d**k in hell” was replied to with a cheery, “Maybe later, got tweets to send.” Such responses fly in the face of the accepted wisdom that abuse of this kind should be completely ignored – an approach that is probably outdated when it comes to social media complaints that are available for all the world to see.

These original and very human responses to criticism and a commercial disaster prompted an outpouring of positive tweets for how O2 was handling Twitter complaints. Overall the company gained a certain amount of respect by reacting as they did.

So social media successes can result from how well you deal with undesirable or damaging comments from members of the public. Bodyforms Facebook page was the platform for a satirical negative comment which quickly went viral, gathering thousands of likes and comments.

The comment itself was effective, neatly lampooning the cliché marketing ploys used by Bodyform and other companies. For a week after the comment, Bodyform seemed to have no response , but eight days after Richard’s initial complaint the company released this video:

The direct engagement with a social media comment, coupled with a tongue-in-cheek deadpan delivery made this humorous video an instant hit. Bodyform capitalised on the original viral sensation caused by the comment itself, virtually guaranteeing that its marketing response would receive at least as much attention. The video has so far been viewed more than 3.7 million times and was reported on in the mainstream media.

The video went viral across social media sites and generated millions of views. The combination of a completely irreverent approach to advertising and a visually appealing video containing zany humour, all in support of a simple business idea, was very effective in generating interest.

The tone and approach to advertising is something that the company has made integral to its website and further marketing activity.

What business owners and social media managers can learn from these examples is that being genuine, honest and humorous in the way you interact with social media communities can result in some superb exposure and marketing reach that is impossible to buy.