Marketing and advertising campaigns have to be innovative in order to be successful. Sometimes it’s the campaigns that push boundaries that are most talked about, although the claim to fame might not always be positive. When an idea backfires, it can create a backlash… Germany is no stranger to excellent marketing strategies, so we’ve compiled a list of Germany’s best and worst ads:

EDEKA is a German supermarket chain that created an international viral hit. The Supergeil video (meaning super cool) shows entertainer Friedrich Liechtenstein dancing around the most banal supermarket items thinking they are ‘Supergeil’. The video has been viewed 13 million times worldwide.

The logistics company has achieved a lot of coverage in the German news with their rather cheeky “Trojan Mailing” stunt. DHL sent out huge packets to be delivered by their competitors (such as UPS and TNT) which were covered in black thermoactive foil and were stored in fridges. The competitor couriers then picked up black parcels that changed colour while they were being delivered. The writing on the packages changed colour to reveal a message which said “DHL is faster”.

Both ads were created by the same Berlin-based creative agency that has produced the much talked about SIXT campaigns. Not everyone has proven an understanding of their target audience however, as the following image campaigns show:

German television broadcaster ARD created a poster for the thematic week of tolerance. The image was shared on social media and depicts an immigrant, a same sex couple, a child and a wheelchair user. The description was supposed to motivate people to think about tolerance; unfortunately the questions used as headlines did not go down well with the audience. Many were appalled by questions such as “burden or asset?”, “normal or not?”, “a pain in the neck or our future?”, “friend or misfit?”. 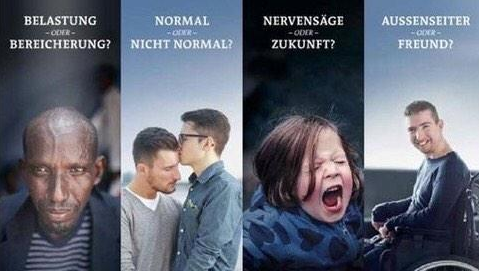 ARD had anticipated harsh criticism and apologised for the “unlucky” campaign after German newspapers created a negative press around the campaign.

The florist Bloomy Days claims to know what women want, because 85% of their clients over the last three years have been female, and women apparently don’t want romance. The florist wanted to stand out from the usually romantic ads of competitors and chocolate makers and were brave enough to go down a very sensual path with their campaign (which was aimed at men) and depicts a poppy reminiscent of … The claim states ““The prettier the flowers, the more beautiful the thank you” – Bloomy Days wishes you a successful Valentine’s Day.” No comment. 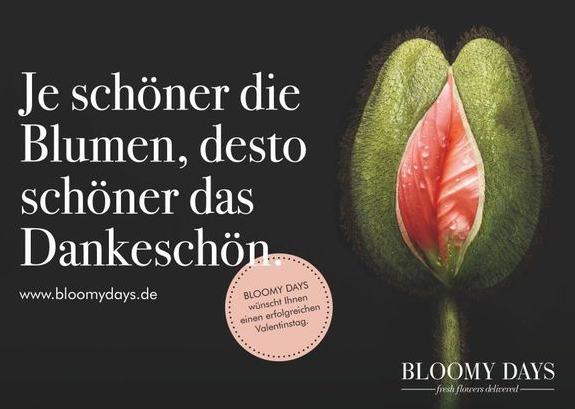