Social media has rapidly evolved and become an even bigger part of users lives than ever before. In 2013 this development will only scale up with the availability of new apps, mobile technology, international dominance, niche networks and further changes and trends in the major social networks. The bond between SEO and social media is getting stronger, and SEOs need to know where their target audience is “hanging out” online, to understand their interests and encourage them to engage, like and share. 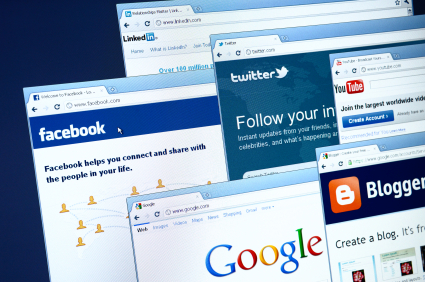 Facebook is responding and changing rapidly to trends and there are no signs of them slowing down. Facebook keep their cards close to their chest so who knows what 2013 will bring? One of the speculations of Facebook is that they essentially will become a vast online shopping mall; an umbrella of online shopping, where the consumer doesn’t need to click and search for products to the extent they do today.

In terms of SEO it will be important to remember the impact that shares, likes and mentions has on authority building, the same goes for Twitter. It is suggested that Twitter is one of the few real-time platforms that holds authority and businesses should not neglect the importance of being active and engaging here. Interacting and taking part in your followers interests will also promote good customer service. It is also most likely that we will see more of promoted tweets and sponsored stories, in a very user friendly way. This means tweets coming from influential people appearing natural in stream.

A few niche focused networks have been experiencing massive growth in the last year, Instagram being one of them. Instagram grew their traffic 17,319% last year, while Pinterest grew by 5,124%. So, what do these two networks have in common? They are both focused around sharing images, the power seems to be lying in the picture. These niche focused picture sharing networks will also continue to grow internationally in 2013. The most talked about network platform this year has been the video app VINE, which makes you share videos, of a maximum 6 seconds, online. For businesses this means that keeping up with the pace of the expansion of networks and actively using multiple networks is crucial. This is especially important for global and international brands.

Content and engagement is the new focus in social media, as networks and users are rapidly growing in numbers. It is not enough to just create content without any prior thought as people have to engage, like and share it as well to gain any sort of authority. Users should no longer be passive as social media wants to interact, and it is easily the the best word-of-mouth marketing tool we have today. People also want to learn something and want to engage with similar minded people. Three new networks have taken advantage of this. First there is the Learnist who focus on sharing what you know, and are already popular in the education industry. Bottlenose provides the user with streams of topics and content based on the users interests and their likes. Bottlenose Search also finds current trending topics through all the major social networks. And finally, Sulia performs very similarly and takes the best parts of Facebook and Twitter that the user actually cares about. It is not about the number of people you have in your community, but the amount of engagement you receive from your group members.

Big online companies are currently collecting information about their users, to try to map out their interests. It is expected that this will result in less searches as information will find the user instead of the user finding it, based on the users online profile. The web is overloaded with information, and the content people are exposed to will become more and more tailored to their needs. It is predicted that advanced software systems and tools will be built out to manage and analyse the overload of social media data. However, there is a current discussion on how this is actually is going to work, as people have different interests in professional and personal capacities. How big companies are going to differentiate themselves in this manner will also be challenging.

In 2013 companies will be able to track the user to a greater extent, thanks to apps, networks and geo-tagging. The digital and physical world is blending and connecting at a whole new level. Are you going for a run in the park and eating out at Bella Italia tonight? You are likely to let your friends know this through social media, which also gives valuable tracking information. Big brand events are expected to plan social sharing into the core of their concepts in 2013.

Mobile technology is developing rapidly and is becoming more dominant. By 2015 mobile online users are said to overtake wired internet users in the US; when it comes to the use of social platforms this change is even nearer in time. The key for networks is to focus on on-the-go easy engagement. Instagram is a great example of this; they already have more mobile users than Twitter. Their network is developed based on smartphone usability. Networks will become better at developing different desktop and mobile experiences as mobile interfaces should be more user friendly with clear calls to action and also incorporate the “rule of thumb”.

From dorm room to boardroom

Social media in industrialised countries is forecasted to grow steadily, but slower compared to that of Asia-Pacific, Africa and the Middle East. These three regions social media growth is forecasted to grow an average of 22.5% in 2013 compared to North Americas predicted 4.1%. For international brands and SEOs this is important to take note of. Working internationally with social media in 2013 will become even more challenging, as new local networks keep popping up everywhere with an intense user base growth. One example is Chinas Sina Weibo network which doubled the number of its users last year and recently passed 400 million users. The main networks like Facebook will also continue to grow internationally, take Latin America for instance where Facebook users grew by 47% last year.

2013 will be an interesting year for social media, as it continues to evolve- but what will be the biggest surprise of the year?