The Festival of Marketing 2015 Roundup

This week, our sales and marketing teams joined 3,000 other industry professionals at The Festival of Marketing 2015 held at Tobacco Dock in London. Spanning two days, the event was a celebration of the industry and a fantastic opportunity to speak with, learn from, collaborate and inspire those in our field. 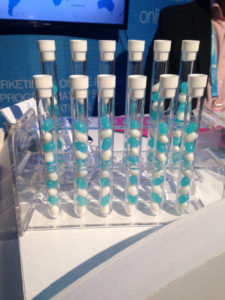 The festival followed a similar format throughout. At the start of each day, attendees met in the main auditorium and received a welcome and introduction from organisers, eConsultancy; this was then followed by a speech from one of the headliners. The rest of the day consisted of “half-hour on, half-hour off” seminars delivered by industry thought-leaders in rooms which were all themed as different facets of marketing. Following each seminar was a half-hour interval where attendees would be able to head downstairs for refreshments and a chance to talk with each other and company sponsors like ourselves. Alternatively, people could attend the Masters of Marketing awards during each hourly break hosted by the male voice of Apple’s Siri, Jon Biggs, celebrating la crème de la crème of campaigns from the previous year. Each day concluded with a headliner in the main auditorium followed by a closing piece from the organisers.

Peer of the realm and British face of business Lord Alan Sugar opened the Festival on Wednesday speaking of his relationship with marketing and advertising and how it has has changed over the years. A particular highlight was when he spoke of the entrepreneurial genius of the late Steve Jobs saying, “Steve Jobs unveiling the iPhone was entrepreneurial genius, not some marketing tosser’s” … to a 3000 strong crowd of “marketing tossers” … Reacting quickly, on day two, there were punters clad in T-Shirts printed “Proud to be a marketing tosser”. Unfortunately, it was mostly an uninspiring talk from Lord Sugar – he didn’t really say a great deal about marketing! Still, it’s always nice to see a TV personality in person and no one can doubt his unprecedented business acumen which we gained further insight into. 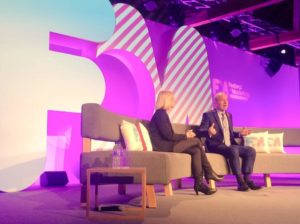 Following Lord Sugar, our sales team in their fetching blue festival lanyards met with attendees and our marketing team went to observe and take part in the seminars. Frustratingly, the festival app was only discovered at start of day one and it turned out to be crucial to the overall experience. The app was used to book seats in seminars and many of the popular ones filled up quick. It turned out however, if you queued, you could get in regardless, but it did mean you’d more than likely be standing at the back, tip-toeing over the sea of heads in front.

Stand out seminars of the day included: Kerry Taylor (CMO of MTV) on the corporate rebrand and new social strategy at MTV. Åsa Caap and the progress of her start-up business OUR/VODKA and partnership with co-leader of the wines and spirits sector, Pernod Ricard and CRO at Persado, Lawrence Whittle’s talk on the automation of creating emotionally engaging messages. All very inspiring and informative in their own unique ways.

The day culminated in a fascinating, engrossing talk from Canadian astronaut and ISS Commander, Colonel Chris Hadfield. He spoke of his monumental career, offering “out-of-this-world” advice and truly motivated everyone to chase their dreams.

Day one ended with drinks accompanied by a thrilling firework display synced to Skrillex’s hit Bangerang.

Arriving back for day two, our wonderful sales team set up shop at the stand once more, ready for another day of festivities.

Ex-Metro Bank boss Anthony Thomson started the day in the main auditorium speaking of his new revolutionary, completely mobile app, Atom Bank. He spoke of the current public perception of banks and his understanding of why everyone despises and distrusts them. He discussed the future of banking 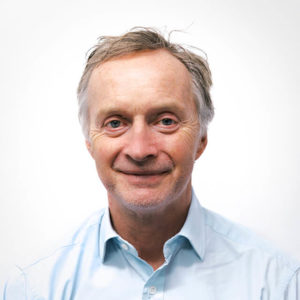 and how his new “first of its kind” digital bank has been designed completely with the customer at heart. Anthony offered sound B2C marketing advice and appeared a genuinely friendly and likeable guy. A great start to day 2!

As the seminars continued, we also continued to speak with prospective clients about our services and expertise to help grow their businesses. We realised great opportunities to speak with and share knowledge with festival attendees in our industry.

Unfortunately, we had to leave before closing headliner Monika Lewinsky – but having read post-festival reviews, it was said that her speech comprised of raising awareness and denouncing the rising incidences of cyberbullying and online shaming that have occurred in tandem with the rapid growth of digital media over recent years.

Overall, the festival was a great experience for us at Search Laboratory. We met with and learned from inspiring marketers, gained great interest from festival attendees, ate some great London grub and stayed in some questionable Airbnb accommodation!