Thoughts On The Debate: Is SEO Bad For The Internet?

Home    Insights    Thoughts On The Debate: Is SEO Bad For The Internet?

A comment from Google’s own Jonathan Rockway has caused a lot of uproar and debate on the web lately, especially in the SEO circles, and not surprisingly either, as among his comment was the line: “SEO isn’t good for users or the Internet at large.” He further described SEO as being a bug that is preventing sites that have bought Google ads to rank highly, and that Google was fixing said bug.

Naturally this didn’t go down well with SEO companies, Internet experts, and Google itself. A lot of heated debate started, and Google quickly reacted and got Rockway to retract his comments. Things calmed down again, and discussions moved on, but the damage had been done. Distrust between Google and SEO is far too strong a word, but perhaps a feeling of unease has been created.

Google’s update of penalising sites with too much SEO has rekindled the debate, and I thought it would be good to compare expert comments with responses from consumers.

Graham Charlton from E-Consultancy discussed the problems and benefits of SEO for users, and concessions were made that manipulative SEO or non-relevant SEO was bad for the user, but that relevant SEO has been beneficial to the user and the clients of SEO firms. Small businesses have been able to be heard on the web thanks to SEO. Without SEO, large brands would be unlikely to interact with users and customers online, an experience that has led to companies being able to improve their tactics and consumers being satisfied that their voices have been heard.

A growing investment in social CRM was a result leading to both online and offline consumers benefitting from better customer service. Charlton’s article also points out how competitive SEO has encouraged businesses to focus on product relevant searches, and has resulted in more content relevant SEO. SEO has a proven record of being of benefit to users and the Internet, and with the current trend towards truly consumer centric SEO the mistakes of the online industry in the past will surely soon be laid to rest.

Do the users agree with the experts?

To find out I created a small survey to find out what people’s thoughts on SEO were. The survey was distributed through my social media channels, so there’s a mix of SEO colleagues, PPC colleagues, friends, family, marketing university friends, and creative writing university friends. So, there’s an interesting mix of people and opinions. I asked respondents if they thought SEO was bad for users and the Internet at large, and gave them 4 answers to choose from. The pie chart below shows the results: 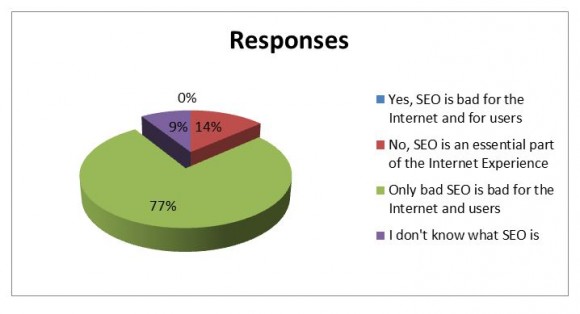 None of the respondents agreed with Rockway’s initial statement about SEO. I think I just heard a large sigh of relief from many SEO workers, myself included.

9% didn’t know what SEO was, while a grand total of 77% responded that bad SEO was bad for the Internet and users.

The survey was anonymous, but I did ask respondents for their gender and age group. A 50-50 split of male and female was received with 0% of respondents belonging to the age group 18-21, 45.5% to 21-25, 40.9% to 25-30, 0% belonging to 30-40, and 13.6% to the 40+ group. The 50-50 split between males and females is of interest, as it shows that both genders were equally interested in responding to the issue. The age groups, however, cannot be taken as demographic data for future campaign or survey plans, since they are biased towards my personal contacts, my peers, age group and family contacts.

What was the wider opinion of the respondents about SEO?

As I’d given respondents answers to choose from, the second question was an open question asking for a reason behind their response. There was a mix of positive and negative opinions of SEO, and here are a few that will give us all some food for thought:

“SEO allows blogs to garner attention and small businesses to compete online. The only time SEO is bad is when it creates poor or duplicate content. Good SEO should not be targeted by Google.”

“SEO based on relevant content can provide users with the information they need.”

“Poorly done SEO or black-hat SEO ruins the experience for users, and spin articles written by people who don’t know much about the subject, aren’t good for users either.”

“SEO is a great way to produce really good useful content written by professionals at no expense to the hosting website. Unfortunately however some of the industry seeks to create quick results by producing fast low quality content and either paying to have it placed or targeting low quality websites. This is bad for the internet.”

“Surely optimising search engines is a good thing… the only problem is when companies employ clever people to optimise their site against the search engine thereby giving them an unfair advantage in the listings, so distorting the users experience.”

“SEO is essential but there are bad types to be avoided.”

These are just some of the responses, as all of them would take up too much room. I think the last one sums up what all SEO companies need to focus on in future: avoid bad tactics. The key points we can take away from the users’ remarks are:

Following what the user would like and expects from their searches will sit well with them and raises the bar to a consumer centric future not only in SEO but within the whole online industry.

I’d like to thank all respondents of the survey for their opinions and comments. Please feel free to share your thoughts with us below! All insights welcomed.