The End of Google Reader

Anyone who logged into Google Reader this morning will have noticed a sad little pop-up informing them that as of 1 July 2013 the service would be no more.

Google announced this change last week among a round of “spring cleaning”, and suggested users export their data and use an alternative RSS Reader (of which there are many – Netvibes is popular and has a similar interface to Google Reader, and Feedly has also popped up in conversation a few times). But although Google might think that should be the end of the situation, Google Reader users seem to have other ideas.

It’s true that Google Reader has had a declining number of users for the last couple of years now, but it still has a huge and loyal fan base that is up in arms about the decision to close it. Google Reader has been on its way out for a while now; in 2011, Google announced it would remove the built-in social integration, and instead integrate the service with Google+.

Users felt this was part of an effort to steamroll them into using Google+, and many have speculated that the complete retirement of Google Reader is to further make way for the social network. People are starting petitions (I found four just doing a preliminary search) and writing tributes to the service in order to try and convince Google to change its mind and keep it open. But at the end of the day, Google Reader isn’t making the search engine any money, and it doesn’t fulfil any of its core missions of search, social and ads so it has to go.

Since the service is essentially an RSS reader, it doesn’t have any particularly far-reaching implications for SEO. The main thing I use it for is keeping up to date with industry news and major developments in my clients industries – however, today my feed is full of stuff about Google Reader! and that can be done on any other RSS reader, as mentioned above.

Where the change might start to affect us as SEOs is with Google Friend Connect. GFC is part of Googles “blogger” service, for people who host their blogs on Blogspot. It’s basically a way for bloggers to follow and read each others blogs; sounds a lot like Google Reader, doesn’t it? The only real difference is that its mainly only available on the Blogspot platform – although other platforms do have plugins which support it. With the imminent closure of Google Reader, many bloggers are speculating that GFC will be next – which seems logical since it does almost exactly the same job. 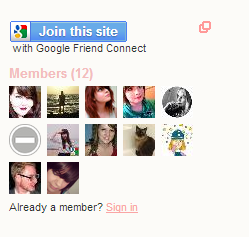 Most blogs that use GFC have their follower count proudly displayed somewhere on the homepage (check out my 12 followers, everyone!), and among most blogging communities, Google Friend Connect follower counts are seen as a measure of popularity and influence – people work hard to get their follower numbers up, and are understandably worried about losing them if the service goes.

When looking around for influential bloggers to offer content to and build relationships with, most of us would be lying if we didn’t say that GFC followers weren’t among the first things we looked at – how many people are going to see your content is important, especially when you’ve put a lot of work into it! And if GFC goes, well lose a big (and perhaps more importantly, clearly visible) way of measuring influence.

There are, of course, many other ways of measuring influence – followers and interactions on social networks such as Twitter, Facebook and Instagram can be a great indication of how popular a blog is, and in preparation for the potential retirement of the GFC service, bloggers have been going over to alternatives such as Hellocotton and Bloglovin in their droves over the last couple of days. We should be taking these statistics into account when measuring a blogs influence already, but if GFC is retired, these will become an even more important way of discovering reach and influence.