Once you’ve finished reading this article I want you to do two things; firstly, stand up and secondly, walk out of your office and take a look around – and before you ask, no I haven’t gone raving mad.

The reason I say do this is because building online brand awareness and acquiring links does not have to always stem from online activities. Take inspiration from the things going on around you and start thinking outside the box (literally!).

Below are two of my favourite PR stunts that have resulted in offline media coverage that has then transferred online and therefore boosted both online brand awareness and contributed significantly to the companies link acquisition efforts.

One of the best examples of a creative offline campaign that was specifically designed to benefit an SEO campaign was carried out by www.bathrooms.com. It combined newsjacking with a genius offline campaign at the time that the Duchess of Cambridge was due to give birth.

During Kate Middleton’s pregnancy, the guys at bathrooms.com were creating an elaborate PR stunt that consisted of them creating a bespoke royal baby bath that they were then going to hand deliver to the guards on the door of St Mary’s Hospital. As part of this plan, they created a page on-site detailing what the baby bath looked like and the dimensions. They then had a real-life bath made and as the journalists camped outside St Mary’s a representative from bathrooms.com delivered the custom designed baby bath.

This caused a fury of activity from the journalists and resulted in an outstanding amount of media coverage for bathrooms.com. The offline media coverage transferred online, resulting in natural links being gained from national titles such as the Daily Express, as well as countless social mentions and the landing page created specifically for the royal baby bath had the most page views on-site for days after the event. 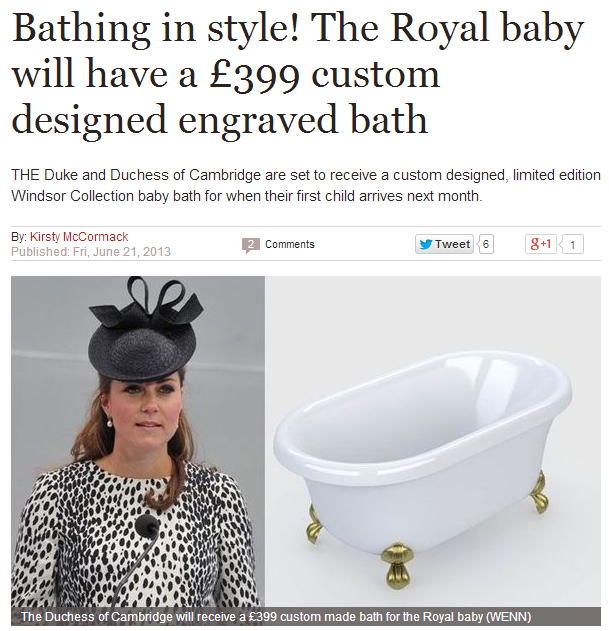 GoSquared startup gets an SEO kickstart via Newsjacking

Nothing creates hype and furore (and the ideal PR opportunity) like the release of eagerly anticipated games and gadgets, in particular, the various versions of the iPad – and the guys over at GoSquared clocked onto this back in March 2012.

Entrepreneur, Chris Leydon, went against the grain of the masses and instead of heading to the Apple flagship store on Regent Street to queue for the new iPad he heard on the Twitter grapevine that PC World around the corner was opening eight hours before Apple. He seized this opportunity and went down adorned in a GoSquared t-shirt and found himself at the front of the line.

Startups using the launch of new products as a PR opportunity caught the eye of Mike Butcher over at Techcrunch who then covered Chris’s use of the launch, resulting in a followed link back to GoSquared. The article was then shared socially over 400 times; a great result for GoSquared both from an SEO and brand awareness perspective.

The key takeaways from both of these SEO PR stunts are to firstly, think big! The pure guts that bathrooms.com showed to use the royal family to gain media coverage for themselves is what makes them stand out from the crowd and secondly, be in the right place at the right time.

Newsjacking isnt a new technique but with technology and digital evolving all the time, if you want to jump on the bandwagon you have to ensure that you have your finger on the pulse and your ear to the digital ground 100% of the time for fear of being left behind.