Sputnik is a new search engine developed by Rostelecom, a telecommunications company. The site was launched in May with plans to be the default search engine for government-controlled companies and institutions. Sputnik will have easy access to official information and government services, such as social work, and can also be an aid in finding a job. 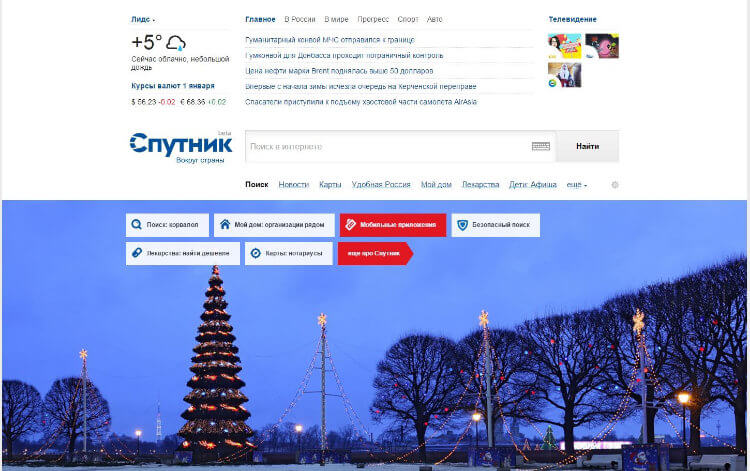 The Government-controlled search engine idea emerged in 2008, as the President at the time, Dmitry Medvedev, was concerned about online news content about the war with Georgia.

Sputnik claims to create a safe environment online where the user is protected from viruses and where personal information is secure. The user will not be vulnerable to any state-forbidden content such as child pornography or drug-related content.

There is, however, a wave of critics who describe this search engine as ‘a tool for censorship’.

Russia has recently been under fire for its attempts to regulate the Internet. Russian SOPA was one of the regulatory bills passed in 2013. This bill is one of the most stringent online copyright regimes in the world. It includes a blacklist of websites that do not comply under the regulations of anti-pornography and extremism, thus allowing the Russian Government to censor websites that are deemed to pose such threats.

This caused a mass ‘web strike’ as thousands of Russian websites went on a “web strike” by going offline and showing the word “blackout” on their homepage in protest or replacing their avatars with a black square. A mass petition was also started to withdraw the law.

Russia has also recently implemented a new law for bloggers. If a blog has traffic of more than 3,000 visitors per day then they are obliged to be registered with the Russian Government and reveal their real identity online, or face punishment. The opinions they post must comply with regulations and must not mention ‘extremist and terrorist information, propagating pornography or violence‘ This is seen as a step by some to stifle bloggers and create a state-controlled set-up to monitor and prohibit them from posting content freely.

According to the statistics below conducted by Pew, those aged 18-29 and 50+ have differing opinions regarding the censorship issue. The discrepancy could lie in the fact that over 50s use the Internet less and thus do not feel affected by the censorship issue. However, it may indicate that more people will be protesting against censorship and online freedom as time passes. 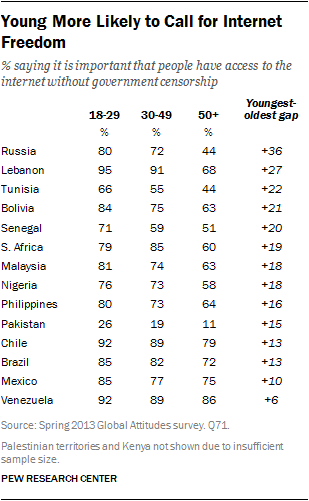 There has also been controversy surrounding social media giants Twitter and Facebook. Recently there has been a near move to block the American social media sites with demands from Russia’s government to comply under new laws and remove content that they deem illegal.

Twitter has been known to refuse to block ‘offending’ content, which led to threats to cut off the social media site completely rather than just the specific offensive content. Russia’s internet regulator stated that blocking the social media sites altogether would outweigh the damage they might have on Russian society.

What impact could Sputnik.ru have in Russia?

Internet in Russia is dominated by Yandex (52.1%) and Google (38.5%), so Sputnik’s attempt to level with these two domineering search engines, is ambitious.

Sputnik is a useful search engine for those who are not internet-savvy as it has a menu of links to guide you to the official information that helps with a variety of services from getting your MOT done to registering your marriage. It is also good for children and could be a used as a primary search engine for schools due to its strict, filtered search results. Sputnik will also have its own mail and browser in order to rival with Yandex, Google and even Mail.ru.

However, as Pew’s statistics demonstrate, dissatisfaction with censorship may see 18-29s and even 30-49 year olds show solidarity to Yandex and Google as a protest against Sputnik.

Many are of the opinion that Sputnik will not pose a great threat for Yandex or Google.  Sputnik’s strongest selling point of safeguarding children from unsuitable content, covered by the imposed legal bills, is not entirely unique, as Google already has ‘safe search’ to protect children online and Yandex has its equivalent ‘family search’.

Will the ‘utopian world’ search engine be successful? Well the Russian Government has the power to enrol state-run institutions, such as schools, to make Sputnik their primary search engine. However, unlike the original Sputnik in space, the search engine is sure to fall flat when competing with Yandex and Google.